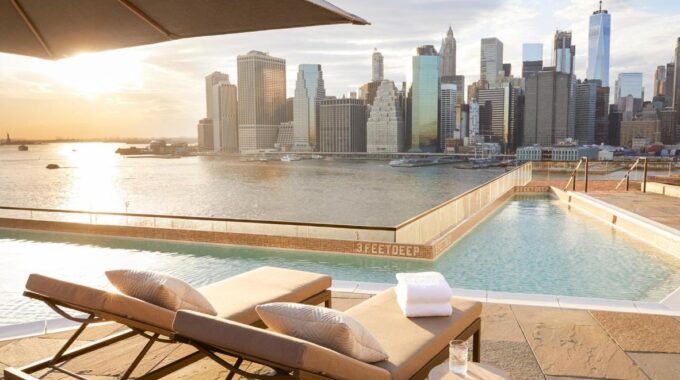 The owners of a building in Williamsburg may be facing a hefty fine, over a massive swimming pool discovered on its roof.

A full-sized swimming pool was installed on the roof of the commercial building. The gleaming 480-square-foot above-ground pool, which apparently was used regularly this past summer, was drained this week, according to the Department of Buildings.

“New York. We know. It’s hot. We get it,” the DOB tweeted. “But please don’t try to build a rooftop swimming pool without first getting permits and hiring professionals to do the job properly.”[1]

This article considers halachic problems with work done without permits and (as per the continuation of the DOB’s tweet) not according to code: The result may be dangerous, and the work may violate applicable law.

Additionally, there is the paramount concern of chillul Hashem;[2] Chazal are very clear that even conduct that is otherwise entirely legitimate becomes prohibited when it entails chillul Hashem.[3] Dangerous construction that violates safety codes and laws would very likely be included in this category.

Regarding the concern for danger, the relevant halachic principles are simple, although their application to real-world scenarios is less so. The Rambam rules:

Anyone who leaves his roof open without a guardrail negates the observance of a positive mitzvah and violates a negative mitzvah, as it says in Devarim 22:8: “Do not cause blood to be spilled in your home”…

This requirement applies to a roof, and similarly to any place that might present a danger and cause a person to stumble and die. For example, if a person has a well or a cistern in his courtyard, he must erect a sand wall ten handbreadths high around them or make a cover for them, so that a person will not fall in and die.

Similarly, it is a positive mitzvah to remove any obstacle that could pose a danger to life, and to be very careful regarding these matters, as it says in Devarim 4:9: “Beware for yourself and guard your soul.” If a person leaves a dangerous obstacle and does not remove it, he negates the observance of a positive mitzvah and violates a negative mitzvah, “Do not cause blood to be spilled.”[4]

These rulings are codified in the Shulchan Aruch, and based upon them, R’ Yosef Eliyahu Fried, a rav in Manhattan’s Lower East Side over a century ago, emphatically insisted that building a sukkah on a building’s fire escape platform is “against the law of the Torah and the mitzvah, and against the state, and against the character of humanity (midas ha’adam).[5]

The great Galicianer posek R’ Yitzchak Shmelkes was asked about a dispute between two neighbors. One had been selling and storing substantial quantities of neift (petroleum, kerosene, or paraffin) and other flammable substances in his shop, and the other reported this to the civil authorities, which compelled the offender to install metal fire doors in accordance with applicable safety codes.

According to Torah law as well, one is obligated to take every possible measure to provide safety from fires, and it is incumbent upon one who causes damage to distance himself…Although [the fire doors] provide only a marginal increase in safety, since the doors are open most of the time, one is nevertheless obligated to do whatever it is possible to do…and therefore [the reporter] does not have the status of a moser regarding the iron doors.[6]

But while there are clear-cut obligations to avoid and/or rectify dangerous situations, the practical application of these obligations is less simple. As we have previously discussed on several occasions, halacha does not require that literally every possible effort, no matter how expensive or inconvenient, be made to reduce or eliminate risk:

While halacha certainly does assign a very high value to the preservation of human life, it also provides for its balancing against economic cost. Thus, commercial activity (such as maritime travel in ancient times, or a dangerous profession like hunting) may be permitted even when it entails significant risk to life.[7] It would seem, then, that in our context as well (the proposal to strengthen building codes in the aftermath of the Surfside condominium collapse), the halachic attitude toward expensive safety precautions will hinge on how we balance the severity of the risk against the economic cost of the precautions in question…

It should be understood that it may sometimes be impossible to completely eliminate all risk, and the expenditure of substantial resources to avoid far-fetched scenarios of risk may potentially even be prohibited under bal tash’chis.[8]

(Although these discussions are primarily about the limits of the prohibition against self-endangerment, it seems likely that similar limits apply to the obligation to avoid harming others.)

Assuming that the halachic obligations to avoid or rectify dangerous situations have been satisfied, we are still left with the question of whether there is a Torah obligation to comply with government building codes per se. While numerous authorities have discussed the application of the principles of dina demalchusa dina (the law of the government is the law, i.e., recognized by halacha as binding upon Jews) and minhag (prevailing custom, which can generate a binding obligation) in the context of nizkei shcheinim (the halachos regulating the conduct of neighbors vis-à-vis one another),[9] these discussions mostly concern cases where someone objects to his neighbor’s conduct, and this objection is supported by law or custom; there is much less discussion of an obligation to follow laws such as building codes in and of themselves, even in the absence of any complaints against one’s conduct.

One of the few authorities who does discuss this latter question is R’ Osher Weiss.[10] As we have previously noted, while he maintains that there is indeed a religious imperative to obey such laws, since dina demalchusa dina and obedience to the law is the “will of the Torah,” he adds that

There is a fundamental difference between the laws of the Torah (both Biblical and Rabbinic) and temporal law. The former are absolute, with no room for compromises, whereas the latter are situational. It is presumably not forbidden by the Torah to jaywalk in the middle of the night, when it is clear that there is no nearby vehicular traffic and not the remotest possibility of danger (and there are no observers present who may learn dangerous habits). Further, it is likely that even the legislators did not intend to forbid jaywalking in such circumstances, but the law is simply unable to formally take into account such distinctions.

Rav Weiss concludes that in such cases, we follow the legislative intent, and one is not obligated to obey the letter of the law where there is no danger whatsoever.[11]

So according to Rav Weiss, as long as there exists some genuine, rational concern for danger, the law must be obeyed (presumably even if the danger is below the threshold that would trigger the Torah’s own obligations of avoidance or rectification), but if there is “not the remotest possibility of danger,” then the law may be ignored.