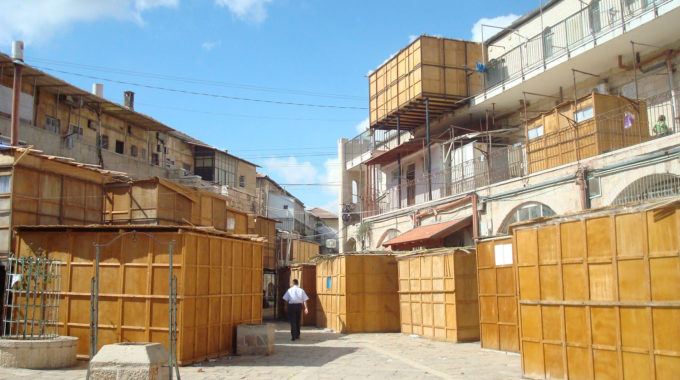 There is a well-known fable of a Jew who built a sukkah in violation of a local ordinance. Someone complained, and on Erev Sukkos, the matter came before a just but considerate judge, who ordered that the sukkah be removed—but granted the owner ten days to comply.[1] In this article, we consider the halachos of the sukkah built in violation of the law.

A sukkah built on stolen property

The Gemara declares that a stolen sukkah is invalid because the Torah states, “Chag Hasukkos ta’aseh lecha,” and a stolen sukkah is not lecha.[2] The halacha, however, follows the view that as a consequence of the principle of karka eina nigzeles (land cannot be stolen), only a sukkah built with stolen materials isn’t kosher, but one built on stolen land is valid.[3]

A sukkah built on public land

Despite the principle of karka eina nigzeles, the poskim rule that lechatchilah a sukkah should not be built on public land.[4] The Darkei Moshe, however, notes that he has not seen people being careful about this. The Magein Avraham struggles to justify the custom, but he ultimately concludes that although such a sukkah is valid bedi’eved, one may not recite a bracha upon it; since it is tainted by the sin of theft, such a bracha would be a bracha levatalah.[5]

Other poskim are more lenient, at least where no other sukkah is available.[6] The Bais Meir explains that since the “theft” of public land is merely for the duration of Sukkos, and the land will be “returned” intact afterward, and the members of the public observe this and do not protest, it does not constitute theft at all. A bracha may be recited, and the admonition of the poskim against building such a sukkah is merely a stringency.[7]

Similarly, the Bigdei Yesha explains that members of the public are considered partners in public spaces, and a partner is allowed to engage in temporary construction on partnership land.[8] Additionally, the lack of objection by members of the public to sukkos erected on public land constitutes a tacit (and irrevocable!) concession of the right to erect such sukkos.[9]

The Bikurei Yaakov adds the argument that the government controls public spaces per the principle of dina demalchusa dina (the law of the government is legitimate law), and insofar as it does not express objection to sukkos erected there, this constitutes tacit permission.[10]

In light of the above, the Biur Halacha concludes that “we should not object to those who conduct themselves leniently, since there are many authorities that allow it.”[11]

A sukkah built in violation of the law

The discussion heretofore has been about sukkos built on public property. In the modern era, poskim have considered the question of sukkos built on private property but in violation of the law.

R’ Yitzchok Zilberstein considers sukkos built in violation of aesthetic zoning regulations. He reports that he put the question to his father-in-law, R’ Yosef Shalom Elyashiv, who ruled that this involves a chashash of gezel and should therefore not be done.[12]

R’ Asher Weiss discusses a sukkah built in violation of building safety laws. Although he maintains that there is a religious imperative to obey such laws, as dina demalchusa dina and obedience to the law is the “will of the Torah,” he nevertheless inclines toward the view that transgressing such a law would not render the sukkah invalid. Insofar as the law is motivated by public safety and not rooted in property rights, there is no issue of theft, and the problem of mitzvah haba’ah ba’aveirah (a mitzvah that is fulfilled by violating an aveirah)[13] is also inapplicable, since the imperative to obey the law is not a full-fledged mitzvah but merely a matter of the “will of the Torah.”

Rav Weiss adds that there is a fundamental difference between the laws of the Torah (both Biblical and Rabbinic) and temporal law. The former are absolute, with no room for compromises, whereas the latter are situational. It is presumably not forbidden by the Torah to jaywalk in the middle of the night, when it is clear that there is no vehicular traffic and not the remotest possibility of danger (and there are no observers present who might learn dangerous habits). Further, it is likely that even the legislators did not intend to forbid jaywalking in such circumstances, but the law is simply unable to formally take into account such distinctions. Rav Weiss concludes that in such cases, we follow the legislative intent, and one is not obligated to obey the letter of the law where there is no danger whatsoever.

Similarly in our case of sukkos that technically violate building safety legislation, since every year hundreds of sukkos are erected throughout the city and the authorities take no action to prevent this and enforce the law, it seems that the government does not object to the sukkos, and there is no problem of dina demalchusa dina even though they are technically illegal.[14]

The Muqata; Come let us reason together to defeat partisanship, Florida Jewish Sentinel. While these stories are apocryphal, someone told me she actually experienced something quite similar, multiple times.

[8]This argument is made by the Bikurei Yaakov, cited below, as well.

[10]Bikurei Yaakov ibid. s.k. 6, cited in Biur Halacha ibid. For a case where the authorities did object to the construction of a sukkah in a common area, see Dispute over Jewish tradition could nix Christmas trees. Palo Alto Online. https://www.paloaltoonline.com/news/2011/10/10/dispute-over-jewish-tradition-could-nix-christmas-trees

[14]Shu”t Minchas Asher cheilek 2 siman 123 pp. 420-22. In this final argument, Rav Weiss seems to be shifting from an evaluation of the legislative intent and the rational application of the law to whether the executive branch of the government attempts to enforce the law and objects to its violation. This latter point is similar to the Bikurei Yaakov’s argument. Perhaps Rav Weiss assumes that executive tolerance is indicative of legislative intent and rational application of the law, but this does not seem entirely obvious.