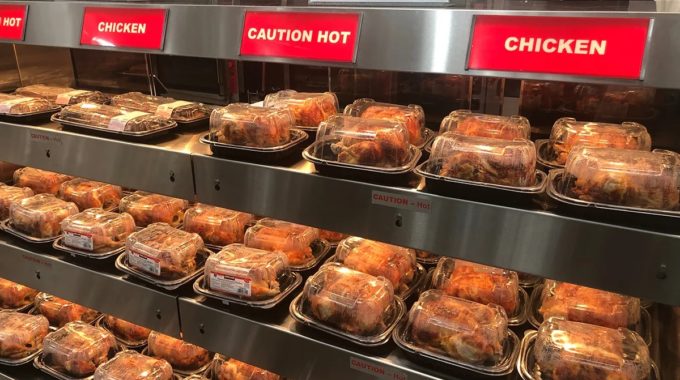 Jury selection recently began for the third federal trial of executives from Pilgrim’s Pride and Claxton Poultry Farms, whom the U.S. Justice Department has accused of conspiring to keep prices high. The executives

face charges related to what prosecutors say was a conspiracy to drive up prices of broiler chicken products from at least 2012 through early 2019…The executives engaged in a “conspiracy to suppress and eliminate competition by rigging bids and fixing prices,” the indictment states…The accusations of price fixing in the poultry industry stretch much farther than this criminal case. Charges and investigations are underway for many corporate entities in the space…But the issue of potential price fixing—and federal government attention to executives—is not limited to chicken. There are also pending civil lawsuits about accusations of price fixing in the pork and beef sectors. Both of these have recently come under additional scrutiny as prices have increased and a few major players have dominated the markets.[1]

Price fixing is an agreement (written, verbal, or inferred from conduct) among competitors to raise, lower, maintain, or stabilize prices or price levels. Generally, the antitrust laws require that each company establish prices and other competitive terms on its own, without agreeing with a competitor…When competitors agree to restrict competition, the result is often higher prices…An agreement to restrict production, sales, or output is just as illegal as direct price fixing, because reducing the supply of a product or service drives up its price.[2]

In contrast to U.S. law, halacha has no concept whatsoever of a crime of price fixing; in fact, the Gemara explicitly allows “agreements among competitors” to restrict output.[3] It is true that in order for such agreements (and their accompanying sanctions for violation) to be binding and enforceable, certain conditions must be met,[4] but to the best of this author’s knowledge, there is no indication that such agreements are actually prohibited in the absence of those conditions.

As we have previously discussed,[5] the Gemara and later halachic authorities do prohibit and excoriate price gouging and profiteering, at least with regard to staple foodstuffs, but price gouging (which is prohibited in most states by emergency regulations or price-gouging statutes)[6] is entirely distinct from price fixing; the former occurs “when a seller increases the prices of goods, services, or commodities to a level much higher than is considered reasonable or fair,”[7] whereas the latter is not dependent on notoriously vague[8] and economically dubious[9] notions of reasonableness and fairness, but focuses entirely on agreements between sellers, as explained above. This latter prohibition against agreements between sellers per se has no analogue in halacha.

Although an agreement among merchants…will usually concern only internal affairs, there may also be external ramifications. This is true where merchants fix a minimum price beneath which no merchant is permitted to sell. The possibility exists that they will fix a high price without economic justification.

This problem is more severe today when the consumer is apt to find himself facing a giant corporation, perhaps a monopoly, and therefore is in need of protection from arbitrary price fixing…

This question also exists where there has not been a formal enactment by the members of the guild, as they can always form a monopoly or voluntarily cooperate among themselves in order to fix minimum prices, at the expense of the community. There are many forms that this can take, and it is quite prevalent today.

The halachic remedy to this situation is to take countermeasures, either by inviting merchants or tradesmen from the outside to break the monopoly, or by organizing a consumer strike. Practically, this is very difficult to organize successfully. The halacha is able to enforce a consumer strike by use of a compulsorily binding agreement among the townspeople. We therefore must consider the power of the community to regulate itself…

The members of a community have the power to regulate the financial life of the community, including the fixing of prices and wages. This need not be done by the townspeople directly but can be effected through elected or appointed representatives.

This power can be used to protect the consumer by acting against arbitrary price fixing by merchants or tradesmen, as mentioned above. An example of such a regulation is found in Responsa Maharashdam (Y.D. 117). In response to price fixing by the wool dealers,[10] the community fixed a maximum price. This remedy was endorsed by the respondent.

“The butchers in our community have raised the prices of meat and are selling more dearly than [is common] in the area.[11] We have decided that this is opposed to honesty and justice and wish to make a firm agreement that no one shall buy meat from the butchers until they sell at the price prevailing in other communities of this area.”[12]

In a follow-up to this article, we shall discuss, bl”n, how according to some opinions, not only does halacha not prohibit agreements between sellers to stabilize prices, it actually requires sellers to cooperate in the maintenance of price stability, and prohibits cutthroat competition.

[1]Megan Poinsky and Chris Casey. Why the chicken executive price-fixing case is a priority for prosecutors. https://www.fooddive.com/news/chicken-price-fixing-case-executive-prosecution/624909/.

[8]“As common as accusations of ‘price gouging’ are, the term has no fixed meaning. Asked when rising prices cross the line to become criminal, New York Attorney General Letitia James told NPR, ‘There’s no definitive answer to that question, but you know it when you see it.’” –J.D. Tuccille. Price-Gouging Laws Will Do More Harm Than Good During the Coronavirus Pandemic. Reason Magazine. https://reason.com/2020/03/16/price-gouging-laws-will-do-more-harm-than-good-during-the-coronavirus-pandemic/.

[9]“Among economists, price gouging isn’t a thing. The term simply reflects the emotional response non-economists have to rapid price increases. What politicians and other anti-price gouging proponents would have you believe is that we can have what we want, at the price we want, simply by passing a law.” –Antony Davies and James Harrigan. ‘Price gouging’ during crisis a good thing.’ TribLIVE. https://triblive.com/opinion/antony-davies-james-harrigan-price-gouging-during-crisis-a-good-thing/.

[10]This seems to be a serious misunderstanding of the Maharashdam’s case, which did not involve price fixing by the wool sellers, but on the contrary, unfettered and unregulated competition between Jewish wool buyers, which drove up the price of wool and accordingly resulted in the gentile wool sellers “consuming our toil, effort, and labor,” and “much damage and financial loss to Jews.”

[11]The wording indicates that the objection was to what was considered to be the demonstrably unfairly high price, rather than to any improper agreement among the butchers.

[12]Crossroads: Halacha and the Modern World, Vol. I.

Cf. our articles A Guilded Age: The State of the Union in Halacha. May 6, 2021; To Form a More Perfect Union. May 13, 2021; Raising the Minimum Wage: Halacha and Minimum Wage Regulation. Undated.