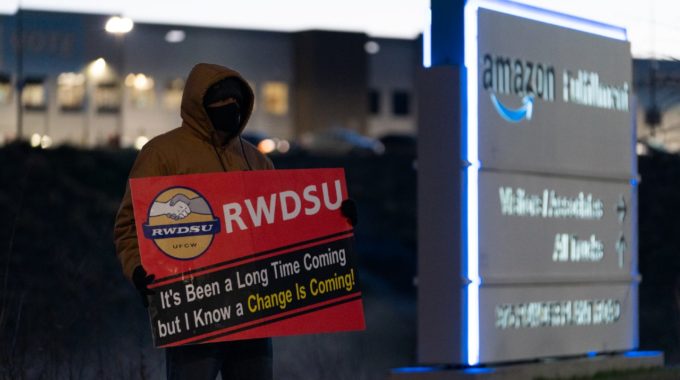 In the denouement of a high-profile, high-stakes battle, Amazon warehouse workers in Bessemer, Alabama recently voted against joining the Retail Warehouse and Department Store Union by a margin of more than 2 to 1, siding with the company and rejecting the union’s efforts to organize them.[1] Amazon has successfully staved off attempts to unionize at its U.S. warehouses for more than two decades. In this article, we explore the basic halacha governing labor organization and unions.

Residents of a city and members of a profession

The Talmud declares that residents of a city are allowed to regulate the prices of goods as well as workers’ wages. It subsequently seems to extend this prerogative to the members of a particular profession, granting them the right to bind each other in restrictive agreements intended to improve their overall economic position, such as limiting the days on which particular members may work.[2] The Rosh infers from this that

All professionals may stipulate (agreements) among themselves, and they are called “residents of the city” with respect to work.[3]

The Talmud qualifies, however, that this right of professional organization is conditioned on the absence of an “important person” in the city. Where such a figure is present, any stipulation must be made “in his presence,”[4] with his participation and acquiescence.[5] The Ri Migash explains that the requirement of the endorsement of the “important person” is due to the fact that an agreement between members of a profession is detrimental to the public, because it will result in higher prices for consumers.[6]

What is the definition of “important person”? The Ri Migash understands it to mean “an important person who has been appointed over the public”;[7] Rambam interprets it as “a distinguished sage (responsible for) correcting conduct within the city and improving the ways of its inhabitants”;[8] and the Rosh limits it to someone like the Amora Rava, “who was the head and leader of the city.”[9] The Shulchan Aruch codifies the Ri Migash’s language.[10]

For such an arrangement by the members of a profession to be binding, it must be entered into by “all” the members,[11] but R’ Moshe Feinstein considers it obvious that “all” is not literal, and a majority is sufficient.[12]

R’ Moshe Feinstein considers this Talmudic discussion to constitute a halachic basis for allowing modern labor unions, provided they comprise most of the workers in a particular region. He argues that in light of the aforementioned explanations of the Rishonim that an “important person” is one who is appointed to oversee municipal affairs, American cities today do not have such persons, so labor unions are entitled to formulate rules on their own, and this is certainly so insofar as the government grants them that right.[13]

Similarly, R’ Shlomo Zalman Auerbach initially assumes that modern labor unions do not have the power to establish rules for their industries without the endorsement of the chever ir (municipal rabbinic leadership),[14] but he subsequently suggests the possibility that “in those places where the municipal rabbis and Torah scholars do not involve themselves in the affairs of workers and the wages of labor, it is as though there is no chever ir there.”[15]

Some contemporary authorities have argued that considering the complexity of modern economics, the task of determining appropriate wage levels is beyond the capability of one person, so an organization such as the Israeli Consumer Protection Agency, a nonprofit, government-funded watchdog, serves the function of “important person” in Eretz Yisrael. Further, if the local “important person” fails to appropriately control prices, vigilante action by individuals (such as organizing a boycott of a company that is overcharging consumers), justifiable under the principle that “a man may take justice into his own hands (avid inish dina lenafshei),”[16] may be the only appropriate response.[17]