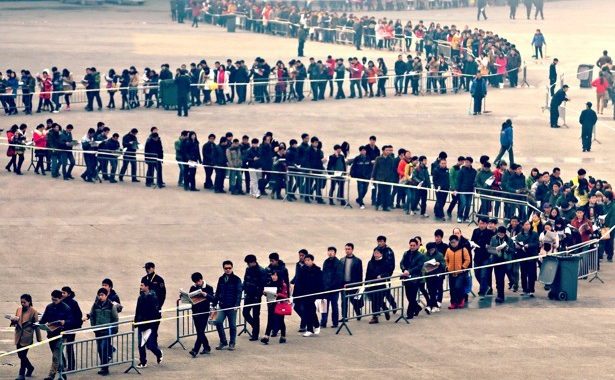 In the first article in this series on prioritization of scarce medical resources, we mentioned R’ Avraham Sofer-Abraham’s belief that physicians tend to follow a rule of first come, first served, and his difficulty reconciling this with the prioritization hierarchy established by Chazal.

I subsequently discovered that no less an authority than R’ Moshe Feinstein reputedly endorsed the rule of first come, first served: R’ Aharon Lichtenstein reports that Rav [Yitzchak Isaac Halevi] Herzog once asked R’ Moshe: “If there is one life-saving injection [available]—to whom should it be granted?” R’ Moshe replied: “To the first one who comes before you.”[1] No further context of this exchange is provided, and it is unclear how R’ Moshe integrated the rule of first come, first served with all the other criteria we have seen (some of which he himself discusses in his various responsa). It is also unclear whether R’ Moshe meant that even if there is currently more than one person requesting the injection, it should be given to the one who made the first request, or whether he simply meant that as soon as someone requests it, it should be given to him, and it should not be saved for others who may subsequently request it (as many jurisdictions are currently doing with the COVID-19 vaccines).

The small and the great

A primary halachic source for the rule of first come, first served in general is a passage in Sanhedrin:

“You shall hear the small and the great alike.”[2] Reish Lakish says: This teaches that the judgment of one perutah should be as dear to you as the judgment of one hundred maneh (ten thousand dinars)…. Reish Lakish was speaking with regard to giving it precedence (i.e., the small claim may not be deferred in favor of the larger claim merely because the disputed sum is smaller).[3]

If a judgment of one perutah comes before you, and subsequently another judgment of a maneh comes, you shall decide the one that came before you first.

Regardless of whether the above Gemara is a valid source for a general rule of first come, first served, poskim do assume the existence of such a rule, and they offer various explanations of its halachic underpinnings and rationale:

In light of these approaches, R’ Yitzchak Zilberstein is uncertain whether cutting in line constitutes an actual tort (hezek) or theft, but he concludes that in any case, it violates the mitzvah of “you shall love your fellow as yourself (v’ahavta l’reiacha kamocha)”[9]—since one would not want someone else to cut ahead of him, it is therefore wrong to cut ahead of someone else. (Invoking v’ahavta l’reiacha kamocha to create a new prohibition is problematic: Although poskim do occasionally invoke the mitvzah to forbid conduct for which an explicit halachic prohibition cannot be located,[10] this is often merely in explanation of an established prohibition, but not to create an entirely new one. After all, the entire Shulchan Aruch Choshen Mishpat consists of distinctions between that interpersonal conduct which is prohibited and that which is permitted, and the latter is permitted despite the fact that the person engaging in such conduct would often prefer the other party not to do so were the situation reversed!)

Rav Zilberstein additionally notes that the Chazon Ish is reported to have said that jumping a line is considered “breaching the fences of the world” (poreitz gidrei olam) and is included in the category of improper encroachment (hasagas gevul).[11]

R’ Tzvi Shpitz also understands that the fundamental bases for the rule of first come, first served are the principles of righteousness and justice (tzedek v’yosher). He adds that a private individual, including a physician, has the right to bypass this order and choose whom he will serve first, but an employee has no right to do so without his employer’s permission.[12]

R’ Moshe Sternbuch, on the other hand, unequivocally classifies cutting in line as “a branch of the prohibition of theft,” since:

The civil laws of the Torah hew to reason and logic, and it is obvious that upholding righteousness requires keeping to one’s place in line. It therefore falls within the rubric of “you shall do justice and righteousness,” and one who deviates from this is considered a thief.[13]