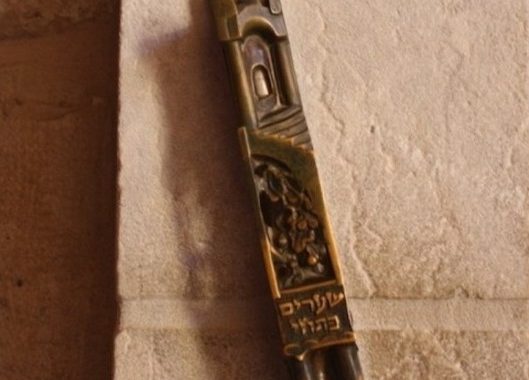 Can A Mezuzah Protect A Non-Jew?

In the United States, schools and yeshivas benefit from the government’s largesse in numerous ways. When public officials pay official visits to our institutions, it is common to reciprocate by presenting them with some token of appreciation and gratitude, as is common courtesy.

In the past, there have been instances where communal leaders presented non-Jewish public officials with kosher mezuzahs to hang on the door of their office as a meaningful gift. These officials have been very moved by the gesture and eager to benefit from the protective powers of the mezuzah.

While finding ways to express appreciation to public officials who assist our mosdos and communities is definitely an encouraged and admirable practice, it is worthwhile to point out that a mezuzah may not be the most appropriate gift to give, as we shall discuss below.

The incident in the Talmud that is most similar to the practicein the above mentioned story is found in the Yerushalmi [1]. As is well known, a special friendship existed between the Roman King Antoninus and Rav Yehudah Hanasi (known as Rebbi). Once King Antoninus sent Rabbi Yehudah Hanasi a precious stone as a gift.

In return, Rav Yehudah Hanasi sent him a mezuzah.

Antoninus was puzzled. He asked, “I sent you such an expensive gift and you send me a piece of parchment?”

Rav Yehudah Hanasi replied, “Your gift I will always have to guard to make sure that no one will steal it. But my gift to you, the mezuzah, will watch over you and protect you at all times!”

It seems from this story that it is permissible to give a non-Jew a mezuzah. However, the matter is not so simple.

The main reason why many Poskim prohibit giving a mezuzah to a non-Jew as a gift is because of a concern that the recipient will not treat the holy object with the proper sanctity and respect.[2] The story of Rav Yehuda Hanassi and Antoninus may have been an exception to the rule because Rebbi knew with certainty that Antoninus would treat the holy object with utmost respect.

In fact, the Rema[3] explicitly rules that it is forbidden to give a mezuzah to a gentile.

In his Darkei Moshe on the Tur[4], the Rema relates that the ruler of a certain city once asked his Jewish subjects to send him a mezuzah. The townspeople were afraid to refuse, lest they incur the wrath of the powerful ruler. Despite this fear, the Maharil[5] ruled that it is forbidden. The Rema disagrees with the Maharil and rules that if there is a concern of “eivah”, fear that refusing to send the mezuzah will lead to hatred towards the Jews that could have dangerous reprisals, it is permitted to send it. The Rema reiterates this leniency in his glosses on Shulchan Aruch[6].

The Shu”t Beer Sheva[7] speaks at length on this topic and posits that Rebbi only sent a mezuzah to Antoninus out of a concern of eivah. The Beer Sheva does quote a possible leniency that this prohibition only applies to a gentile who is an actual idol worshipper; however, a gentile who does not serve idols is not suspect to defile the mezuzah or treat it improperly and one may present him with one. However, the Shu”t Rav Pe’alim[8] says that the Beer Sheva only suggests this as a possibility and does not actually endorse this leniency.

How Much Hate Is Needed?

Regarding what actually falls under the category of eivah, Rav Moshe Feinstein zt”l writes in Shu”t Igros Moshe[9] that this simply means that the non-Jew will hate you for what you did to him, which will certainly have some form of negative ramifications. It does not have to be such a severe hate that it could lead to a danger of possible loss of life. Rather, even if he will only severely injure the person  or cause a serious loss of money, it is still considered eivah.

As an example, Rav Moshe poses a theoretical case of a Jewish landlord. One of his non-Jewish tenants asks him to affix a mezuzah on his doorpost or to keep up a mezuzah that was left there by a previous tenant. If the landlord knows for certain that if he denies this request, the non-Jewish tenant will move out of the apartment, causing him to lose a considerable amount of rent money until he can find a new tenant, it is considered eivah and the landlord may leave up the mezuzah.

Rav Moshe stresses that two conditions must be met to fall under the category of eivah: 1. Renting out apartments must be the landlord’s main source of income. And 2. He must be certain that the non-Jewish tenant will vacate if he refuses his request for a mezuzah. If these two conditions are not met, the leniency of eivah cannot be used.[10]

When a school gives a public official a mezuzah unsolicited, there is obviously no concern of eivah had they not given it. Therefore, it would be very difficult to permit gifting a mezuzah to a non-Jew in such a scenario.

[2] The Shu”t Ginas Veradim, Orech Chaim 2:28, adds another reason for the prohibition. He says that giving a mezuzah to a non-Jew is in and of itself a “horada b’kedusha”, lessening of the holiness of mezuzah.

[5] Hilchos Mezuzah, Os Daled. This is also the view of the Ohr Hachaim in his Sefer Rishon L’Tzion

[10] Rav Moshe goes so far as to say that it would even be prohibited to give a non-Jew a posul mezuzah if the leniency of eivah does not exist.