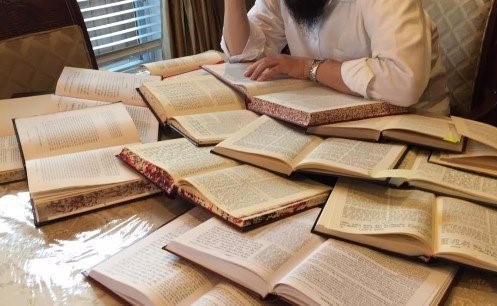 It (the tzitz) shall be upon his forehead continually, for appeasement for them before Hashem.

And you shall place on the Table showbread before Me continually.

The Gemara (Yoma 8a, Menachos 99b) records a dispute concerning the meaning of the word tamid. According to R’ Yosi, tamid in the second pasuk doesn’t mean at all times; removing the old lechem hapanim in the morning and placing the new ones in the afternoon is sufficient. The Gemara derives from the opinion of R’ Yosi that the obligation to learn Torah day and night can be fulfilled by learning at least once per day and once per night. R’ Yishma’el disagrees and tells his nephew Ben Dama that he may not learn chochmas Yevanis (Greek wisdom) because of the constant obligation to study Torah.

In discussing the permissibility of leisure activities, the poskim invoke this Gemara, as well as the one (Avodah Zarah 17) that forbids visiting Roman stadiums due to moshav leitzim (see Tehillim 1).[1] The Or Zarua forbade hunting with dogs for these reasons, and the Mahari Bruna questioned the permissibility of watching jousting competitions. The Mahari Weil, Mahari Bruna, and other kadmonim discussed the practice in earlier times to play cards or gamble on Chanukah, and they explicitly or implicitly accepted it, at least grudgingly, but some Acharonim were strict. But the Chasam Sofer and R’ Yosef Chaim Sonnenfeld defended the custom, as not everyone is capable of studying Torah full time.

The Knessess Hagedolah reports that his rebbi and other rabanim in his time sanctioned playing chess, and some played themselves. On the other hand, the Minchas Yitzchak and Mishnah Brurah question the propriety of doing so for leisure. The common custom today is to be lenient concerning leisure activities such as chess or bowling, though it is still an open question whether one who is able should refrain.[2]

[2] See also the psak of R’ Chaim Pinchas Scheinberg (https://din.org.il/en/2016/05/10/attending-sporting-events/?lang=en and https://www.dafyomi.co.il/azarah/insites/az-dt-018.htm), who holds that issues of moshav leitzim apply only where bitul Torah is a concern, not when one needs a break from learning. In addition, he holds that the prohibition in the Gemara of visiting a stadium applies only to events involving avodah zarah, not necessarily to sports and other leisure activities.