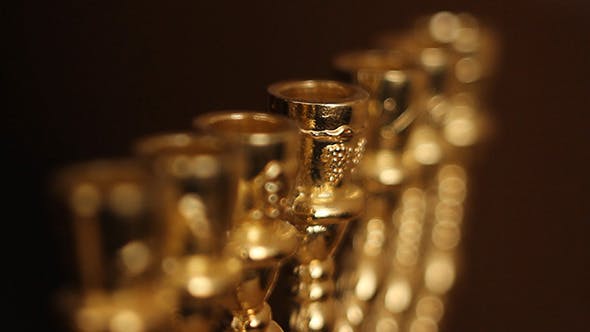 And you shall make a menorah of pure gold…

The Gemara in Avodah Zarah says it is forbidden mid’Oraisa to build a replica of the seven-branched menorah of the Bais Hamikdash. Though the original was made of gold, a replica may not be made in any metal, because any metal is kosher b’dieved for the menorah.

The Pis’chei Teshuvah cites the view that a round candelabra of seven branches would be permissible because the menorah in the Bais Hamikdash was straight. But others forbid this.

Most opinions prohibit owning or using a seven-branched menorah even if it was made by and purchased from a non-Jew.

The Sheivet Halevi says that the prohibition would not apply to hanging lamps, as they do not resemble the menorah. However, R’ Akiva Eiger’s nephew R’ Shmuel Halevi Birnbaum writes in a letter that his uncle was extremely strict regarding this prohibition, to the extent that when he found a hanging lamp in his home that had seven branches and was in the shape of a star, he had it removed, even though it did not resemble the Menorah in the Bais Hamikdash at all.

R’ Ovadiah Yosef writes that a seven-branched electric candelabra is permitted because it does not resemble the menorah. Some sources even permit a candelabra built for candles rather than oil.

There is a famous replica of the menorah in the Old City of Yerushalayim built by a group called the Temple Institute. They claim this was permitted because it was built to be used in the Third Bais Hamikdash, and the only prohibition is to have a replica for one’s home. However, it was discovered that this golden menorah is really only gold-plated iron. As noted, a menorah not of pure gold could only be used b’dieved in the Bais Hamikdash, so it is highly questionable why this institution would build a b’dieved menorah for the Bais Hamikdash.