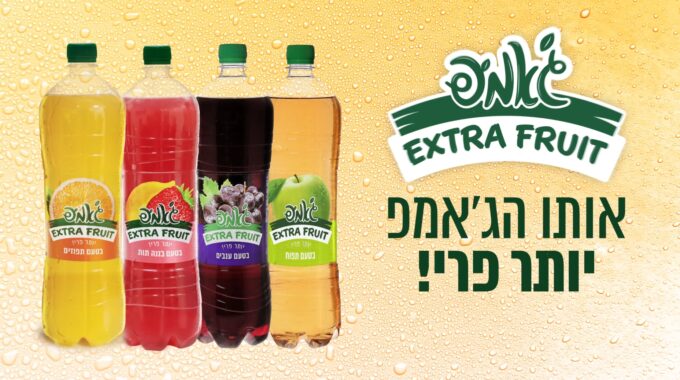 The Israeli Chareidi comedy duo Bardak (Efi Skakovsky and Meni Wakshtock) recently produced a promotional video for a new “extra fruit (yoteir pri)” version of the popular Israeli fruit-flavored drink Jump.[1] The video portrays one man repaying another for a loan of a bottle of the old version of Jump with a bottle of the new “yoteir pri” version, and their ensuing argument over whether this constitutes ribbis (interest): On the one hand, the new version is still “oto (the same) Jump,” but on the other hand, it contains “yoteir pri.” The controversy rapidly spreads and intensifies: Eventually, a young man goes so far as to emphatically tell a shadchan that he refuses to meet a prospect “because they are yoteirnikim, and I come from a family of oto-davarnikim—so the match isn’t suitable.”

Although the video is clever satire of Israeli Chareidi society (if arguably somewhat irreverent toward the laws of ribbis, regarding which the Tur warns that one must be “very, very careful” and notes that one who lends with interest is as though he has denied yetzias Mitzrayim and Hashem Himself),[2] the basic scenario at its core is eminently plausible; in this article, we consider some of the halachic issues involved.

Had the borrower of the Jump returned the exact same beverage, there would still be a potential ribbis problem. Chazal enacted a general prohibition against making loans of anything other than currency (“se’ah bese’ah”—a se’ah (measure) for a se’ah”), since in the event that the price of the loaned goods increases during the duration of the loan, the repayment would constitute ribbis:

A person may not say to another: Lend me a kur of wheat and I will give it back to you at the time the wheat is brought to the granary, as the wheat may increase in value, which would mean that when he gives him back a kur of wheat at the time the wheat is brought to the granary, it is worth more than the value of the loan, and he therefore will have paid interest. But he may say to him: Lend me a kur of wheat for a short period of time, e.g., until my son comes or until I find the key, as there is no concern about a change in price during such a short interval of time. Hillel prohibits the practice even in this case. And Hillel would similarly say: A woman may not lend a loaf of bread to another unless she establishes its monetary value, lest the wheat appreciate in value before she returns it, and they will therefore have come to transgress the prohibition of interest.[3]

There are, however, a number of exceptions to this prohibition:

The prohibition of se’ah bese’ah does not apply when the loaned goods have a fixed market price known to both borrower and lender.[7] The definition of a fixed market price in the context of ribbis in general, and of se’ah bese’ah in particular, is beyond the scope of this article,[8] but we note that R’ Yaakov Yeshayah Blau, a leading contemporary authority on ribbis, opines that

In our day, most standard merchandise and products are considered yatza hasha’ar, and in particular those things that are subject to price controls.[9]

In the contemporary marketplace, most products (with the exception of seasonal items) are readily available all year long, but their price tends to fluctuate from merchant to merchant. Over time, though, these prices remain steady within a given range. Most poskim hold that these are considered items which have set market prices, despite the disparity in price between merchants.[10]

Some authorities maintain that the prohibition of se’ah bese’ah does not apply to a loan of a small amount, such as a loaf of bread,[11] and the loaf may be returned even if its value has increased in the interim.[12] Several rationales are offered for this dispensation, notably that of the Rama that since it is a small amount (davar muat), people are not particular with each other about it (“la kapdi bnei adam lahadadi bazeh”).

The above discussion is referring to borrowing a se’ah and returning exactly a se’ah, and most of the cited dispensations would not allow returning more than the borrowed amount. The one possible exception is the final dispensation of davar muat, regarding which Rav Blau does entertain the possibility that when a loaf of bread is borrowed, a similar loaf may be returned, despite the possibility that the returned loaf might be larger (and not merely more expensive due to a price increase) than the borrowed one. He qualifies, however, that one should certainly be stringent if the increase in size is apparent (nikar).[13]

In the Jump scenario, since the new version’s label is prominently emblazoned with “EXTRA FRUIT,” and the extra fruit is the subject of an advertising campaign, this would seem to constitute a textbook case of nikar. If, however, it turns out that the extra fruit is so minimal as to be objectively indiscernible and the claim is merely a marketing gimmick, then this would likely not be considered nikar.

Further, even if the extra fruit is readily perceptible and the new formulation is generally considered a significant improvement over the old one, it may still be argued that there is still no ribbis, as the new version is not larger or priced higher, and it is not fruit that is being borrowed and returned, but Jump.

Some suggested that this might be the equivalent of ribbis dvarim, which is prohibited despite the intangibility of the interest and its lack of concrete economic value:

From where is it derived with regard to one who is owed one hundred dinars by another, and the borrower is not accustomed to greeting that lender, that it is prohibited to start greeting him after receiving the loan? The pasuk says, “…interest of any matter (davar) that is lent with interest” (Dvarim 23:20), which can also be read as indicating that even speech (dibur) can be prohibited interest.[14]

If the new version would be more expensive than the old version (due to the increase in quality and the cost of the ingredients), then it seems obvious that repaying a loan of the old with the new would constitute ribbis.

[1]Bardak–Sa’aras Haribbis (Pirsomes Jump). YouTube. https://www.youtube.com/watch?v=pJpphCG1SwE. I thank my friends Russell Kwiat and Seth Jacobson for bringing this video to my attention.

[5]To avoid the initial loan itself constituting ribbis, some maintain that it must be specified in terms of value rather than quantity (i.e., to lend a pound of flour that is currently worth a dollar, first one ounce of flour is lent with the stipulation that the loan is of 6.25 cents of flour, and more or less than one ounce of flour must be returned if the price of flour drops or falls, and the remaining fifteen ounces of flour are then lent normally), while others (Sefer Yehoshua psakim uchsavim siman 112) maintain that this is not necessary, since the prohibition of se’ah bese’ah does not apply to small amounts (davar muat–see below in the text)–see Bris Yehudah ibid. n. 41.