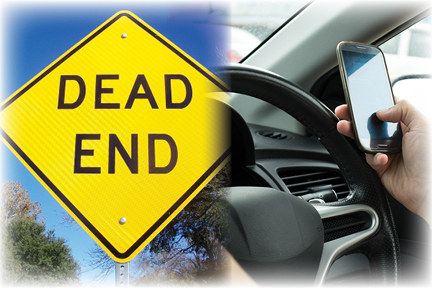 The Dangers of Texting While Driving

The popularity of cell phones has had some dangerous consequences. Mobile communications are linked to a significant increase in distracted driving, resulting in injury and loss of life. The National Highway Traffic Safety Administration reported that in 2012 driver distraction was the cause of 18 percent of all fatal crashes, with 3,328 people killed, and crashes resulting in an injury, with 421,000 people wounded. The Virginia Tech Transportation Institute found that text messaging creates a crash risk 23 times worse than driving while not distracted. In most states texting or cellphone use while driving is illegal. In this article we will explore these issues from a halachic perspective.

Dozing off Behind the Wheel

The late Rav Ovadia Yosef Zt’l and Rav Shmuel Wosner Zt’l both wrote about the liability of a driver who fell asleep behind the wheel and caused serious injuries to the passengers.  Rav Yosef (Yabia Omer 9, CM 5) discusses a case where Reuven got a ride with Shimon to Chaifa. Shimon had hardly slept the night before and dozed off while driving and got into a serious accident. Reuven was seriously injured and needed to be in the hospital for a month. He then sued Shimon in Bais Din for medical expenses and loss of work.

Rav Yosef discusses whether the driver dozing off is closer to o’nes, beyond his control, or a p’shiah, negligence. Rav Yosef explains that there are many opinions which generally maintain that a person who unexpectedly dozes off and causes damage is not responsible because he cannot control his body. However, he invokes the Talmudic concept of Tchilaso b’p’shiah v’sofo b’o’nes, that a person whose negligence brought on a situation where the damage was beyond his control is still liable. Similarly, when the driver dozed off, it was obviously unintentional and beyond his control. However, getting behind the wheel with the knowledge that he had not sufficiently slept the night before is clearly negligent. Therefore, based on this concept, the driver’s dozing off is viewed as negligence.

A ruling of the Ohr Zaruah, an important Rishon, supports this approach. The Ohr Zaruah ruled that a watchman who fell asleep on the job and allowed the item to be stolen is considered negligent and is liable. He explains that while falling asleep may be uncontrollable, the watchman knew that his job was to be awake and should have sufficiently slept before. Similarly, both Rav Yosef and Rav Wosner (Shevet Halevi 8,301) point out that the driver should have also made sure to have sufficient sleep before getting behind the wheel. Therefore, he is considered negligent and is liable for damages.

The Maharil (Shu”t 45) writes about a tragic incident where a woman mistakenly smothered her baby. He maintains that allowing the infant to sleep next to her is ‘close to intentional homicide’.  The Chasam Sofer explains that although falling asleep is not controllable the woman should not have kept the infant next to her. For this reason, if the mother had taken the child to her bed to feed him and fell asleep as she was caring for the child, she is not at fault and does not need atonement because she was doing the best she could to care of the child.

This ruling of the Maharil demonstrates the same point made in the previous discussion. While falling asleep may be out of a person’s control, this is only if the situation was unavoidable. However, if a person has the ability to avoid the situation where falling asleep could cause damage or death, they are fully responsible for their actions.

These concepts certainly apply to distracted driving. If a driver becomes distracted because of conditions beyond his control and gets into a fatal crash, it could be considered an o’nes and he is not responsible for the loss of life or the damages. However, by picking up a cellphone or texting, the driver is knowingly putting others in a potentially dangerous situation. For example, the National Safety Council (NSC) estimates that speaking on a cell phone while driving reduces focus on the road by 37%. The Virginia Tech Transportation Institute demonstrated that when sending a text while traveling at 55mph, the driver travels the length of a football field ostensibly blindfolded. As such, a fatality resulting from such distraction is close to an intentional homicide because the driver created the dangerous situation. Additionally, because these practices are illegal in most states, the driver is forewarned that these behaviors are really dangerous. Therefore, the driver is fully responsible for death or injuries he caused.

We have demonstrated that ignoring the state laws and texting or talking on the cell phone while driving puts others at risk and is consciously creating a dangerous situation. The Torah writes ‘You shall not put blood in your house’. The Talmud (Bava Kama 46a) learns from here that it is prohibited to have dangerous animals or a shaky ladder. Furthermore, we find that a person whose animal killed a person is punishable by ‘death at the hands of Heaven’. Rav Chaim Brisker Zt’l understood that this demonstrates that there is a Torah obligation to make sure not to cause monetary or bodily harm. Clearly, texting and talking on the phone while driving, violates these prohibitions.