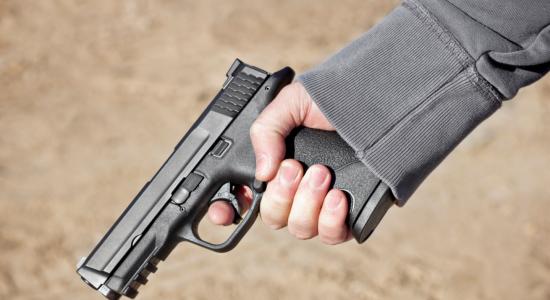 The terrible tragedy that occurred in Pittsburgh left us all with a sense that we are not as safe as we’d like to be. Many people want to increase the security of our public institutions. To this end, it is important to delve into the halachos that relate to security measures on Shabbos.

The act of shooting a gun is clearly forbidden mid’oraysa, as when one shoots a gun, he creates a combustion that is equivalent to making a fire.

We can assume that one would actually shoot a gun only if he was faced with a situation of serious danger to one’s life – pikuach nefesh – in which case any measures may be taken. Therefore, practically, this prohibition is not usually relevant.

More relevant would be the prohibition of carrying a gun to a shul through an area that is not encircled by an eruv. If one must pass through a real rishus harabbim, carrying a gun would be a Biblical prohibition. The concept of pikuach nefesh would not apply to this prohibition, as one need not place himself into this situation. Even if it is deemed necessary to have armed guards in shul, one may not transgress a d’oraysa in order to be able to daven in a shul.

However, carrying firearms to shul may be done through non-Jews. While it is forbidden to ask a non-Jew to perform a melacha d’oraysa on Shabbos specifically for one’s self, it is permitted in a case of “tzorech gadol” – great need, and going to shul on Shabbos is such a need.

If there is an eruv in the area, can a Jew bring the gun to shul or is a gun muktzah?

An object that is used exclusively in a way that is forbidden on Shabbos has the status of “muktzah machmas issur”.  Such items may not be handled on Shabbos at all. However, if an object can be used in a permissible way on Shabbos, even if its main use is in a way that is forbidden, it has the status of a “kli shemilachto l’issur” and may be handled in two ways: either “l’tzorech gufo”, for use in a permissible way, or “l’tzorech mekomo”, to move because its place is needed. A hammer, for example, is used for the act of building, but can also be used to crack nuts. Therefore, it may be moved for one of those two reasons.

A gun falls under the category of kli shemilachto l’issur because, in addition to its use as a firearm, it also is used to serve as a deterrent. Just seeing an armed guard will deter most criminals from approaching a shul, and that, in and of itself, can be considered a use. Thus, it would be permitted to carry a gun for this purpose. However, as soon as one gets home, he must put down the gun.

Another security measure that many shuls are considering is the installation of security cameras and metal detectors, which leads to another halachic discussion.

This question arose a number of years ago when surveillance cameras were installed in the Old City of Jerusalem, which led to the concern that when one walks in front of these cameras he has transgressed the prohibition of kosev, writing, as he is causing his image to be created on the screen.

The contemporary Poskim, including Rav Shlomo Zalman Auerbach zt”l and Rav Yosef Shalom Elyashiv zt”l, permitted one to walk in front of these cameras. They explained, based on the words of earlier Poskim, that although it is forbidden to perform a melacha on Shabbos; however, it is not necessarily forbidden to have a melacha performed as a result of your action if you did nothing consciously to cause it to happen. Therefore, if someone is merely walking down the street, and his picture is taken through no desire of his own, he has not transgressed any prohibition.

Similarly, if someone walks down a street and triggers an automatic light to go on, he has not transgressed any prohibition, as he has not done any act of melacha.

This leniency, however, will not permit someone to walk up to his own house thereby triggering automatic lights or surveillance cameras, as in such an instance he is deliberately doing an act that causes a melacha.

When one walks through a metal detector, knowing that he has metal objects in his pocket that will create an electric current that will set off an alarm, he would seemingly not have this leniency, as he is physically performing an act that causes a melacha to be done.

Similarly, Rav Moshe Feinstein ruled that it is forbidden to use a microphone on Shabbos, even though when one speaks into a microphone he is not creating a new electric current but is merely magnifying an existing one. He explains that since the magnification of the current is recognizable to all, it is akin to a new current. Accordingly, going through a metal detector that does not create a new current when triggered would only be permitted if the enhancement of the existing current does not make a noise and is not recognizable.

The obvious solution would be to walk through the metal detector with no metal in one’s pocket, and without any intention of setting it off. If one does so, he would not be actively performing any melacha.

Regarding walking in front of closed-circuit cameras, one may walk down the street, as we explained earlier, even if that means walking past cameras. However, to specifically walk into one’s home or into a shul when one knows he will be pictured on camera would be problematic.

In any event, the actual operation of any such equipment on Shabbos should only be done by non-Jews. May we all merit the protection of the One Above.