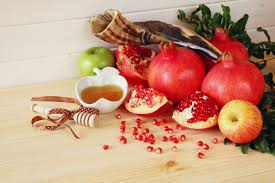 The Gemara in Horeos (12a) and Krisus (5b) discusses different ways for a person to determine whether or not he is destined to have a good year. One such examples is lighting a candle during Aseres Y’mai T’shuvah and watching to see if the fire is straight. Based on this Abaye says that one should eat certain foods which symbolize different blessings on Rosh Hashana since we see that symbolism has substance.

The Rishonim and Achronim ask why this is allowed. There is a prohibition of Lo Tinachashu, which means one is prohibited in trying to find different signs and symbols to predict or influence the future. The Meiri in Horeos writes that that which we do simanim on the night of Rosh Hashana, while it is not nechisha, does give off the appearance of it. Therefore he explains that Chazal instituted saying different teffilos, which make it clear that these objects are simply intended as a way of prayer to a Higher Power. However, if one mistakenly believes that the actual eating of the foods will alter his future, it would be forbidden.

The Maharsha (Horeos 12a, however in many prints it is accidentally printed on 12b) explains that the only prohibition of nichisha is with regard to negative things, however defining goodness which is only from Hashem is allowed.

There is a machlokes whether or not one recites the yehi ratzon prior to eating these foods with Hashem’s name or not. The Kitzur Shulchan Aruch (129;9) and the Steipler (Orchos Rabainu Vol. 2 page 175) state not to recite Hashem’s name. The Mishnah Berurah (583; 2) and others state that one should recite Hashem’s name. In the Sefer V’dbarta Bom (160;2) it is brought that Rav Dovid Feinstein shlit”a maintains that one can recite Hashem’s name since after all it is a teffilah; he adds that that was his father’s custom (although he himself does not do so).

The prevailing opinion is that one should make a birchas haeitz, eat a little piece, and then recite the yehi ratzon.

Reciting Shehechiyanu the First Night of Rosh Hashana on the Fruit

It is customary to have a fruit on the night of Rosh Hashana which one has not had all year, so that one can recite the b’racha of shehechiyanu. The question which arises is whether or not it is best to keep the fruit on the table during the recital of Kiddush, so that the birchas shehechiyanu recited by Kiddush can exempt the fruit as well, thus minimizing the need for another b’racha.

Therefore, on the first night of Rosh Hashana one should make sure that there are no fruits requiring a shehechiyanu on the table during Kiddush. If it was mistakenly left on the table, the K’sav Sofer maintains that one should still make a b’racha on the fruit, since the b’racha on the yom has nothing to do with the fruit.

Second Night Rosh Hashana with Regard to Shehechiyanu

The second night of Rosh Hashana is different in this regard. The reason for this is that there is a question in the Gemara whether or not the two days of Rosh Hashana are considered one extended Yom Tov – which if so then he already recited a shehechiyanu on it the first night – or whether they are considered two separate ones, thereby requiring its own b’racha.

In Shulchan Aruch (600;2) it is written that on the second day of Rosh Hashana one should wear a new article of clothing or place a new fruit on the table and then recite shehechiyanu; if one doesn’t have that he should still recite shehechiyanu.

In other words, since there is a minority opinion that one would not make a shehechiyanu on the second night of Rosh Hashana by Kiddush, it is recommended that one should keep a fruit on the table that was not on the table the night before, and have it in mind during the b’racha of Kiddush. It is important to note that one should have in mind the yom as well, since that is the main requirement according to the majority of opinions.

This seems to contradict that which was previously quoted from the[IF2]  K’sav Sofer, that the b’racha on the fruit and yom have no correlation and they therefore cannot be made in conjunction. However, see the Minchas Shlomo as to how he seems to resolve this issue.

What Types of Fruit Require a Shehechiyanu

The reason we make a shehechiyanu on fruits we eat is because it brings one joy. This is despite the fact that one may not feel this joy (See Vezos Habracha (18:1, pg 159) in the name of Rav Elyashiv and Rav Chaim Kanievsky). There are Poskim who rule that the B’racha of Shehechiyanu is only recited on fruits that one actually has happiness from eating. (See Shu”t Chasam Sofer (55) and Shu”t Shevet Halevi (Vol. 4; 25) who rule this way and therefore write that only on the Shivas Haminim should Shehechiyanu be recited.)

Other Poskim maintain that as long as the fruit is enjoyed, even if it doesn’t bring any special happiness, the shehechiyanu is recited when eating it for the first time that season. (Psak of Rav Shlomo Zalmen Auerbach Zt”l and others).

Fruit that is available in the marketplace all year round (because of refrigeration and transportation) do not require shehechiyanu.

The Mishna Brurah (225:11) writes that it is preferable to say Shehecheyanu first in order to not make an interruption between the b’racha and eating. However, in Vezos Habracha (Ibid) it is brought that the custom is to make the b’racha of ha’etz on the fruit first.

If one forgot to make the b’racha before eating, one may make it as long as they have not finished eating; once finished, a shehechiyanu cannot be made on that fruit.

Two Different Fruits on the Table

If one has two different fruits on the table requiring a shehechiyanu, then under all circumstances one would only make one b’racha for both. If they were both on the table, then even if one is planning on eating the second fruit later he would still only make one b’racha, based on the fact that according to some sources seeing the fruit is enough to require a birchas shehechiyanu. (See Igros Moshe Vol.1; 87 and Kaf Hachaim 225;31 with regard to a case in which the person had specific intent not to be yotze.)

[IF1]Don’t understand, you are just stating that they are being done on different things (day vs. fruit) but not explaining a fundamental difference, a difference of their very natures.

[IF2]I understand what you are trying to say, not sure that dichotomous is the right word, maybe it would be better to keep it simple and write “this contradicts what was previously said”, or “this is in contrast of the previous view”, etc.