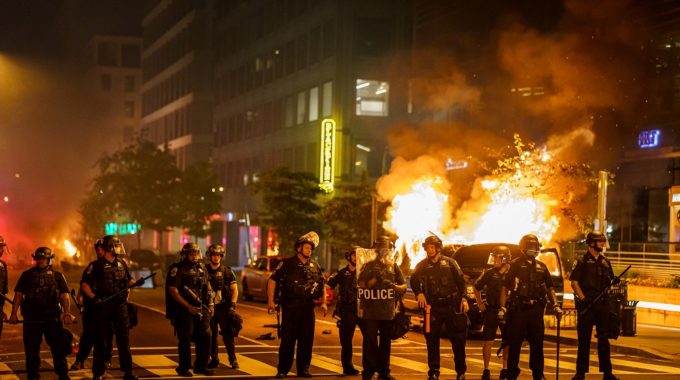 A Torah perspective on chaos (ra’os)

In light of the terrible violence and unrest that has gripped the United States in recent days, it behooves us to examine the concept of lawlessness according to the Torah. Are support for anarchy and demonization of law enforcement Torah violations per se? Does flouting the laws against stealing goods, harming people, and burning buildings constitute an aveirah independent of the particular transgressions involved?

The Rambam (Hilchos Melachim 9:14) states that the residents of Shechem were liable to death in Parshas Vayishlach for not preventing the abuse of Dinah, which is why Shimon and Levi had the right to kill them. The Rambam explains that although the townsfolk did not attack Dinah themselves, one of the seven mitzvos of b’nei Noach is to set up a legal system to preserve peace in society. Since none of the residents of the city who saw what occurred protested or brought the perpetrators to justice, they too were responsible for the crime.

The Ramban disagrees, arguing that we do not find that non-Jews who do not set up courts are liable to death. He posits that a sin of commission, rather than omission, is required, so he explains Shimon and Levi’s actions differently.

But perhaps the Rambam doesn’t mean to say that the crime lay in the populace’s inaction, but that fostering flagrant disregard of decency is reckoned as the active creation of a lawless environment. If so, any social system that condones lawlessness or promotes disdain for or hatred of law enforcement is actively creating a dangerous environment for all. As the famous Mishnah in Pirkei Avos directs, “Pray for the welfare of the government, for if not for fear of the government, a man would swallow his fellow alive.” Of course, policemen who overstep their boundaries should be prosecuted. But all police cannot be condemned on account of a small number who deport themselves wantonly.

The Torah mandates that we abide by the justice system established by the society: dina d’malchusa dina. Rashi (Gittin 9b) avers that the reason for this is that we must confer approval and legitimacy on the code that the society enacts in fulfillment of its Divine mandate. Thus, one who denigrates the system of law and order would seem to be guilty of violating the imperative to create such a system.

Does a looter have the status of a rodef, one who is pursuing another to kill him, whom one is permitted to kill in response, as it says, haba l’hargecha, hashkeim l’horgo (one who comes to kill you, kill him first)? Although looters are seemingly committing only financial crimes, the Gemara (Sanhedrin 72a) says that a homeowner may kill a burglar because it is assumed that the infiltrator came prepared, should he encounter resistance, to kill. What about a nighttime attack, when the targeted stores were purportedly empty? Can we assume the looters did not arrive prepared to kill because they did not expect to encounter the owners?

It stands to reason that generally, looters were aware of the possibility that they may be stopped by the police, private security, or a motivated shop owner; in such cases, it could be presumed that the looters planned to respond with violence if confronted, so the directive of haba l’hargecha hashkeim l’horgo would apply and police could preempt them by shooting first.

It is true that the Gemara states that if possible, one must try to avoid killing a rodef if yachol l’hatzilo b’echad meieivarav (one can save the quarry by just injuring the pursuer). But many Rishonim maintain—and the halacha accords with this view—that the target himself is not bound by this limitation and may kill the pursuer even in this instance. In addition, if police shoot at the legs but miss, they might not get a second chance, which would put their lives in danger. Therefore, under the circumstances described above, the halacha would permit a police officer to shoot to kill.

It appears that Jews living in non-Jewish societies are to promote the values of maintaining a justice system within the broader society. This is one reason that it is important to take part in the electoral process and support these values. Although we may be inclined to vote for the candidate who will support our local and religious interests, perhaps when these values are called into question the Torah would direct us to vote for a candidate who more strongly supports a conservative, traditional, law-abiding society rather than a more liberal candidate who does not always express respect for the system of law and government.

May Hashem uphold the welfare of the government and protect us from chaos.