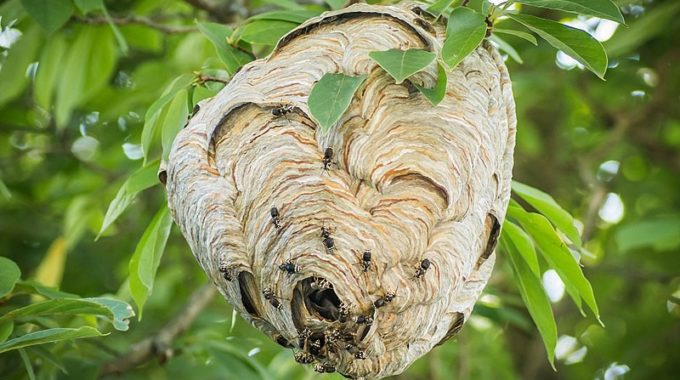 Q:  A large hornet’s nest on my neighbor’s roof has brought terror, and several stings, to my children. I asked the neighbor to deal with it, but he only sprayed it, to no avail. After being rebuffed repeatedly when I asked him to have the nest removed by an exterminator, I called one myself. May I bill the homeowner?

A:  The Gemara in Bava Kama teaches us repeatedly that a person is liable to pay for damage caused by his property, known as mamon hamazik. The Gemara also teaches us that one is required to prevent his property from damaging others. So if the homeowner owns the hornets, he would be responsible. It would appear at first glance that since the hornets are on his property, the property acquired them for him with kinyan chatzer.

However, the Rivash (417) rules that if rainwater flows through a man’s land and then damages others, it is not a case of mamon hamazik, because a) he didn’t previously own the water, b) he wasn’t negligent, and c) he neither needs nor wants the water. Our case, too, meets these conditions, so it wouldn’t qualify as mamon hamazik.

It would seem that our case is similar to one in Shulchan Aruch C.M. 264, where the sefarim of two men were confiscated by the local poritz (nobleman). The Rama rules that if one victim paid off the poritz with the intent of gaining the release of both sets of sefarim, his friend would have to repay half the money. This is based on the concept of yored, that if A pays for something that B needs and benefits from, and A does so with the intention of benefiting him, B must reimburse him.  However, says the Rama, if the man paid the poritz with only himself in mind, his friend would be exempt. Likewise here, if you had called the exterminator with the intention of benefiting all the affected neighbors, they would have to pony up. According to the Nesivos (178), the neighbors may be liable to share the expense even if that was not your intent.