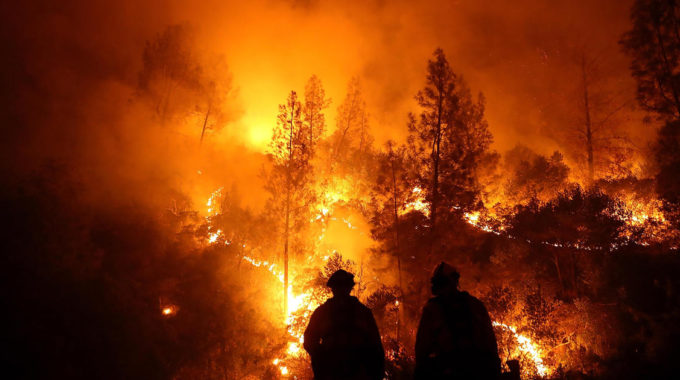 Who Is Responsible for the California Wildfires?

The recent severe fires in northern California, with the ensuing tragic loss of life and of property, gives us all pause to reflect on the great chasadim of Hashem and to realize how much we depend on Him to protect us every moment of our lives.

That being said, we also can take some time to reflect on the halachic ramifications such a situation creates.

Is a firestarter liable?

The halachic questions raised by the California wildfires are many. To name a few: If someone lit a fire that caused a large conflagration, is he responsible to pay for everything the fire damages?

If the fire causes a loss of life, is the one who started it liable for the death penalty?

It appears that at least some of the California fires were caused by electrical malfunctions, and numerous lawsuits have been brought against the electric company to this effect. Does an electric fire have the same halachic status as a manmade fire?

The Mazik of Fire:

Aish, fire, is one of the four nizkei mamon, damages done by one’s property, which are listed in the Mishnah in beginning of Bava Kama. This is referring to a fire that one lights on his property that spreads and causes damage to someone else’s property.

The halachos of aish are discussed in Choshen Mishpat[1], however there is an opinion that not all of them are enforceable by a contemporary bais din.

It is important to bear in mind that the mazik of aish does not refer solely to fire. Anything which damages through a “koach acheir”, an outside force; for instance, debris falling from a wind and causing damage or water flowing through the force of a gust of wind also fall under this category.

As an example of the damage that a fire can cause, for which the lighter would be liable, the posuk says a case where someone lights a blaze that goes into his friend’s field and burns his pile of wheat. The Gemara tells us that this example is used because a pile of wheat is an entity that is out in the open and can be clearly seen. We learn from there that if a fire burns something which is covered (referred to by the Gemara as “tamun b’aish”), the lighter is not liable to pay.

In a later Gemara[3], it is stated that there is a fundamental dispute between Reish Lakish and Rav Yochanon regarding aish. Reish Lakish says that “isho m’shum memono”, one’s fire is one’s property and he is liable to pay for any damages it causes, just as he is responsible for damage caused by anything he owns. However, he always has the exemption of tamun b’aish. Rav Yochanon disagrees and says that sometimes “isho m’shum chitzo”, fire is akin to an arrow that someone shoots – meaning he is directly responsible for the damage, just as he would responsible if he shot an arrow at someone’s property.

The Gemara concludes that Rav Yochanon would agree that isho m’shum memono if the fire was lit in a way that it should have stopped before reaching someone else’s field. For example, if there is a wall in between the two fields that should have stopped the fire, but the wall fell down and the fire spread past the wall. In such a case, Rav Yochanon would agree that the lighter is exempt from payment on things that were tamun. However, if nothing stood in the way of the fire and it naturally spread to someone else’s field, Rav Yochanon says the fire is m’shum chitzo, a direct result of the lighter’s action, and he is liable to pay even on tamun.

The Poskim rule that the practical halacha is like Rav Yochanon.

The Shach[4] adds that if someone actually enters his friend’s field and lights a fire there, according to the view of Rav Yochanon he is directly responsible for the damage caused by the fire, even if a wall stood between the fire and the objects that were burned, and he would be liable to pay even for things which were covered.

As mentioned earlier, the mazik of aish can include damage caused by water. Thus, if someone forgets to turn off his faucet and the sink overflows and damages his downstairs neighbor’s ceiling, he would be liable for the damages. According to Rav Yochanon, he would even be liable for damages done to covered items, as the damage was caused directly by the water he let out of the sink. However, if one’s pipes flood in a way that is not a direct result of his actions, the damaging water definitely falls under the category of m’shum mimono, and one would not be liable to pay for anything that is covered.

In Part 2 of this series, we will continue our discussion by moving on to the status of electrical fires and the liability one would have if a fire he started actually kills somebody.