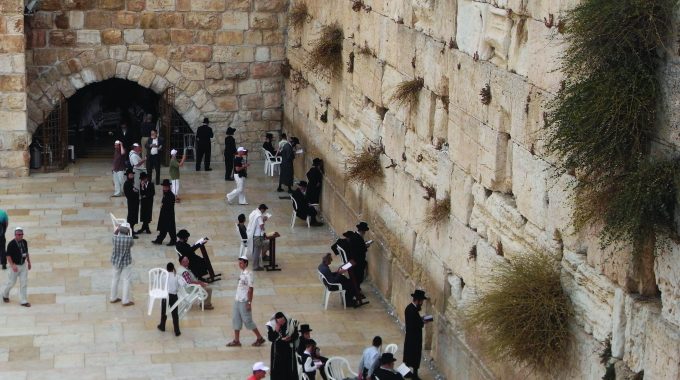 But what does the Torah say?

The Mishna (Midos 2:1) states that Har HaBayis is 500 by 500 amos. The dimensions of the site known by that name today are approximately 1600 feet on the west, 1550 on the east, 1050 on the north, and 900 on the south. By any account of the size of the ama, it would appear that the site has been significantly expanded from its original configuration.

To understand the Halachic issues involved in entering the site, here’s a brief primer:

There are three zones in Eretz Yisrael with regard to the presence of temai’im. In ascending order of kedusha:

Machanei Yisrael: Walled cities in Eretz Yisrael have this kedusha. Tzara’as infects a person with the highest level of tuma, so a metzora is barred from any area that has even this kedusha, including the city of Yerushalayim.

Machanei Leviya: This is an area with hashra’as haShechina, but no avoda takes place here. The entire Har HaBayis has this kedusha. One infected with tum’a hayotzeis migufo shel adam, such as a zav or ba’al keri, is barred from entry.

Machanei Shechina: This is the Azara, the place of the Avoda. Here even a temai mais or one who has touched a sheretz—tum’os that infect a person from without the body—are barred.

We can cleanse ourselves of tum’a hayotzeis min haguf by going to a full-fledged mikveh (many men’s mikva’os don’t qualify) with all the necessary preparations. The problem is that the lower level of tum’a, tum’as mais, is the hardest to remove: it requires the application of aifer para aduma, which we cannot perform today. This leaves us with an incurable inability to enter the Azara.

Entering the Azara in a state of tum’as mais is a chiyuv kareis according to most Rishonim, even today. The Mishna Berura, uncharacteristically commenting on these matters, rules in accordance with this view.

The problem with entering Har HaBayis is that we don’t know where on its vast expanse is the Azara. The nevua (Micha 3:12) that Tzion would be plowed like a field was fulfilled by the Romans under Turnus Rufus on Tisha B’Av of the year 133 C.E., and there have been many earthquakes and numerous landfills in the area. The result of these events is that the contours of the site have shifted considerably, as evidenced by its current dimensions. There are those who stand only at the back of the Kosel plaza for fear that part of the plaza itself may be the Azara. While few authorities subscribe to this concern, it underscores the geographic ambiguity. Though some, like the Radbaz, maintained that the rock under the Dome of the Rock is the Even Shesiya, and we could use its location to measure the boundaries of the Azara, the relaibility of that tradition is not unassailable. Because of the uncertainties and the severity of the issur, it has been Jewish practice for a very long time to avoid Har HaBayis completely.

Some maintain that the wall surrounding the Har Habayis, which includes the Kosel, itself is part of Har Habayis, so one cannot insert one’s fingers into its crevices without purification from tum’a caused by bodily emissions.

Some also maintain that because the Kosel isn’t perfectly vertical and actually leans over the plaza, the area underneath the overhang has the status of Har Habayis, and one must stand back.

The Kaftor VaFerach, alone among the Rishonim in penning a comprehensive analysis of the geography of Eretz Yisrael, writing in the 14th century C.E., maintains that the then-current walls of the Har HaBayis were the original ones, and that it is forbidden to pass within them.

The effort to turn Har HaBayis into a place to visit, whether to demonstrate Jewish sovereignty or to be close to Hashem, is severely misguided. Sadly, political and other considerations have overcome severe Halachic prohibition. Our duty is always to follow our mesora and be true to Hashem’s Torah.

Chazal refer to Yerushalayim as Linas HaTzedek, a place where all who spent the night did so in a state of righteousness. The presence of kedusha was so palpable that one couldn’t help being impacted, and one who sinned would do teshuva before going to bed.

The Torah tells us that when the Kohen Gadol entered the Kodesh HaKodoshim on Yom Kippur, “v’lo haya ish ito”—no man was with him. The Zohar teaches that this means not only that the Kohen Gadol was unaccompanied by others, but that no man—even he!—was there. The Kohen Gadol was a completely spiritual being at that point, akin to a malach.

The mitzva of mora mikdash demands that one enter that holy place in a state of enormous awe. This was no Chol HaMo’ed outing. One would shed his physical reality before going in.

The Bais HaMikdash itself was devoid of physicality; the laws of physics, of time and space, didn’t obtain there. As described by Chazal, people stood packed together and then prostrated themselves with room to spare. A small bite of hilechem hapanim would be sufficient to sate a kohen. Those who ate sacrificial meat produced no waste. This was an otherworldly existence.

This is the way Har Bayis is to be experienced, apart from the Halachic issues that attend its ascent. Throngs of people clad in T-shirts, bearing iPhones, and engaged in casual conversation is hardly the picture of awe.