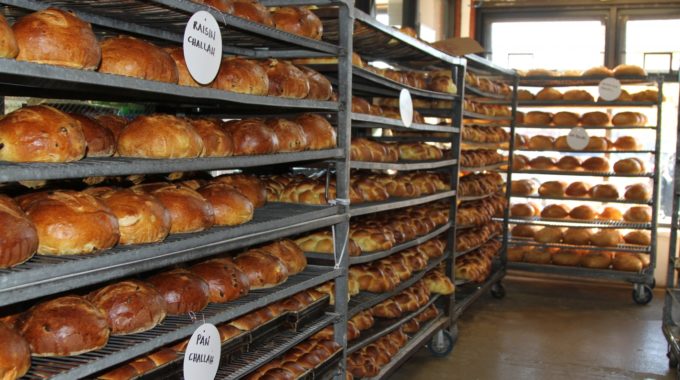 The Tur writes that dough which is owned by a Yisroel but is baked by a non-Jew becomes forbidden like bishul akum. This would mean that it would not have any of the leniencies of pas akum. For example, even if pas Yisroel is unavailable, this bread would still be forbidden. Shulchan Aruch writes similarly that dough that belongs to a Jew that was baked by a non-Jew, without any Jewish participation in the baking, is forbidden. However, Shulchan Aruch does not explain whether he means to pasken like the Tur that the bread is completely assur, or if it is like pas akum which has certain leniencies.

Taz and Shach interpret the words of Shulchan Aruch like the Tur, that in this case the bread would have the status of bishul akum. This would imply that even if the non-Jew was a palter (professional baker), there would be no room for leniency. Pri Migadim explains that pas palter was only permitted because of “chayei nefesh” (difficulty of living without bread), and this heter could not be applied to bread that belongs to a Jew. Since the Yisroel has the ability to bake the dough himself, this is not considered chayei nefesh.

Igros Moshe offers another approach. He says that if the Jewish owned bakery requires many workers to run, we cannot expect the Yisroel to bake all the bread himself, nor can we expect him to only hire Jewish worker. Since he needs to hire non-Jews to do the baking, this bread would qualify for the leniency of chayei nefesh, and even the Tur would agree that it is permitted. Based on this, the OU permits certifying pas palter from factories that are owned by Jews.

If a bakery wishes to bake pas Yisroel, this can be accomplished by having a Yisroel turn on the ovens. Once the oven is turned on, it will remain in “pas Yisroel” status, even if the fire in the oven temporarily turns off, so long as the temperature in the oven does not dip below 176° F (80° C), which is the lowest cooking temperature. Alternatively, if the ovens have pilot lights that are lit and secured by the mashgiach (aish m’aish she’hidlik Yisroel) then bread baked in this oven would be pas Yisroel (as per Rema Y.D. 113:7). However, it is not sufficient for the mashgiach to turn on a lightbulb or glow plug that will always remain on. Although this can be considered a hashlachas kisem (adding a twig to the fire), there are two explanations in the Rishonim as to why hashlachas kisem works. Rambam says that hashlachas kisem acts as a heker (reminder) that pas akum is forbidden. Rav Belsky points out that from the lashon of the Rishonim1 that the kisem is “machshir ha aish” or “machshir ha’tanur”, it is clear that one can only create a heker, once there is already an existing fire. Rav Schachter adds that a kisem is only machshir the aish if it combines with the fire, which does not happen with an electric element. Other Rishonim, including the Rosh and Ramban explain that hashlachos kisem works only if it is mikarev bishulo (it quickens the cooking time). Since turning on a light bulb or glow plug has no effect on the cooking time of the bread, this cannot be viewed a mikarev bishulo. If a heating element is installed which can heat the entire baking area of the oven to 176° F, and would stay on all the time then this would also be acceptable.

If bread is baked on Shabbos at a Jewish owned bakery, the bread may be eaten after Shabbos b’chdei she’yaseh (the amount of time it took to prepare). For example, if preparation and baking time for a loaf of bread is 4 hours, in order that one should not benefit from the act of chillul Shabbos, one must wait until 4 hours after Shabbos before consuming this bread. Mishnah Berurah explains that this is true, even if the bread was baked for a specific recipient. If a Jew was involved in the baking of the bread, the bread would be forbidden to that person forever, however others, even if they were the intended recipients, may eat the bread after Shabbos b’chdei she’yaseh. The OU does not require kashering the keilim, since the bread itself is permitted to the consumer after Shabbos, the beliyos in the keilim become permitted as well. In general, regarding Jewish owned factories, the lag time from when an item is produced until it reaches the consumer, will be much longer than b’chdei she’yaseh.