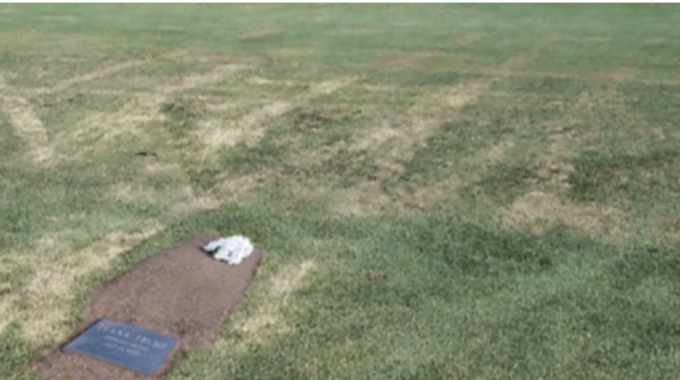 The location of Ivana Trump’s grave—near the first hole of the golf course at Trump National Golf Club—may have tax implications for the business owned by the former president.

Tax documents from the Trump Family Trust, published by ProPublica, show the trust sought to designate a property in Hackettstown, New Jersey, as a nonprofit cemetery company, though the course itself is 20 miles away in Bedminster…

Under New Jersey state tax code, any land that is dedicated to cemetery purposes is exempt from all taxes, rates, and assessments. Cemetery companies are also specifically exempt from paying any real-estate taxes, rates, and assessments or personal property taxes on their lands, as well as business taxes, sales taxes, income taxes, and inheritance taxes…

This article considers several aspects of this situation from a halachic perspective.

The Torah of taxation

By way of introduction, it is important to note that major early halachic authorities declared that the rules of taxation are not rooted in the “holy mountains”[2] of the Gemara, nor in pure logical reasoning (sevara), but rather in local prevailing custom (minhag).[3] In other words, there is no one inherently correct system of taxation, and communities are free to establish norms and rules as they see fit.

But this should not be taken too far: The Gemara does contain at least some rules of taxation,[4] and there is a rich and complex body of post-Talmudic literature on the subject, establishing a variety of principles and rules in this area, some of which we discuss in this article. As the Trumas Hadeshen puts it, “These matters are more dependent on minhag than they are dependent on Torah law”[5] (emphasis added), which is not to say that they are not dependent on Torah law at all. He proceeds, however, to expand the scope of minhag to include not merely minhagim established by scholars, but even those established by laymen.

It should further be noted that the classic Torah literature on taxation primarily concerns internal taxes levied by Jewish communities on their members (often to meet collective tax burdens imposed on the communities by external, non-Jewish governments), as opposed to taxation in the modern era, which consists of obligations imposed on individuals and corporations directly by governments. Nevertheless, the principles and rules in the classic literature may still be relevant to the tax systems of the modern era.

In the halachic literature on the topic, taxes were typically assessed on (business) property, not income. There is discussion, however, as to whether real estate is taxable.

R’ Yosef Tov Elem (Bonfils) rules that taxes are not collected from[6] land, because unlike lending money at interest or dealing in merchandise, which are highly profitable and do not require profit sharing with brokers and the like, the proceeds of farming must be shared with a sharecropper, and there are many potential misfortunes that can inhibit profitability, such as extreme heat or cold, insufficient or excessive rain, hail, and locusts.[7]

Similarly, the Maharam of Rothenburg records that “throughout our kingdom, we do not pay tax from real property.” He initially does not offer a reason for this, but he subsequently explains that is because only business assets are taxed, and while it is initially unclear why he assumes that real property is not considered “business assets,” he subsequently cites the explanation of R’ Yosef Tov Elem.[8]

R’ Yosef ibn Ezra, in his classic work on taxation, Masa Melech, discusses these responsa along with other sources at length. He begins by establishing that

The consensus is that taxes are collected from funds with which a person does business and generates profit.

He then raises the question of whether taxes are collected from real property as well, and ultimately concludes that absent a custom to the contrary, they are not, for the reason given by R’ Yosef Tov Elem:

And as to the law, this is the rule: a man who has a field or vineyard is exempt from paying tax from it even if it generates produce, since it depreciates due to unfortunate events, unless there is a local custom that we follow…[9]

He proceeds, however, to note that in his city of Salonika, Greece (“a Jewish metropolis”[10]), taxes were paid from fields and vineyards, since the need for revenue was great due to the overwhelming pressures of exile.

While the extent to which the rationales given by these authorities would apply to a golf course in United States today is debatable—on the one hand, the profitability of a golf course may indeed be impacted by extreme weather, while on the other hand, swarms of locusts are uncommon in New Jersey. As a practical matter, though, these concerns are moot, because there is certainly a well-established custom to tax real estate, both personal and commercial, and the halacha is clear that the rules of taxation in general, and the question of the taxability of real property in particular, are determined by minhag.

The Rosh rules that charitable funds in an individual’s possession are not taxable.[11] The Trumas Hadeshen rules similarly that one who designates funds for mitzvah purposes (such as the study of Torah, the marrying off of orphans, and the support of the poor) is exempt from taxes on these funds, “in order not to cause them to fail in the future[12]” (i.e., in order to avoid deterring charitable giving).

(This justification for the exemption of charitable funds from taxation is roughly analogous to what is today called the “subsidy” view, as opposed to the “tax base” view:

The Trumas Hadeshen continues, however, by limiting this exemption to where the money is completely and irrevocably dedicated to charitable purposes. But where the donor retains rights to the capital, as a resource to be drawn upon should he or his descendants fall upon hard times, then it is “obvious” that he is not exempt and he must pay tax from them as from his other assets.[14]

It is clear, then, that while land dedicated completely to nonprofit funerary use would be exempt from taxation, a revenue-generating golf course in which one chose to bury his ex-wife would certainly not be.

[1]Katherine Tangalakis-Lippert and Isabella Zavarise. Ivana Trump was buried near the first hole of Trump National Golf Club. Her gravesite could offer tax breaks for the business. Business Insider. https://www.businessinsider.com/ivana-trump-gravesite-trump-national-golf-club-tax-break-2022-7;

Bess Levin. You’ll Never Believe It but Donald Trump May Have Buried Ivana on His Golf Course for the Tax Break. Vanity Fair. https://www.vanityfair.com/news/2022/08/donald-trump-ivana-trump-cemetery-tax-breaks;

Edward Helmore. Will Ivana help Donald Trump with tax breaks from beyond the grave? The Guardian. https://www.theguardian.com/us-news/2022/jul/31/donald-ivana-trump-cemetery-golf-course-taxes;

[6]In the language of the Torah literature on the topic, the formulations “taxes are collected from” or “paid from,” as opposed to “assessed on” or “paid on,” are commonly used, and we have preserved this language in our translations.

[13]Adam Parachin, The Charitable Contributions Deduction: A Tax Debate or a Question of Charity versus Government? p. 5. Tax Policy and Charities. The Urban Institute. Apr. 2013.

John Tyler. Charitable deduction as “subsidy”: does it really mean what some think it means? Philanthropy Daily;

Sara Barba and Brian Walsh. The Problematic Characterization of the Charitable Deduction as a Subsidy. Philanthropy Roundtable. Jul. 28, 2020

[14]These rulings of the Rosh and Trumas Hadeshen are codified by Rama in Shulchan Aruch C.M. 163:3.