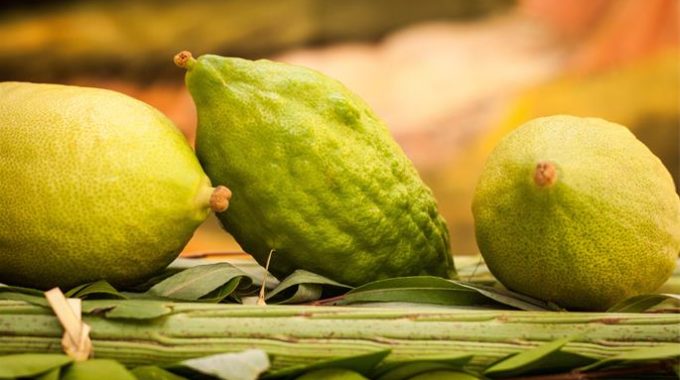 This guide is intended to serve as a basic primer on what to seek and what to avoid in an esrog. It is not a comprehensive treatment of the subject. When in doubt about the kashrus of an esrog, a rabbinic authority should be consulted.

A black, white, or dark brown spot, or a boil/blister, and according to some, a raised blettel (a light brown mark caused by a leaf resting on the esrog during the fruit’s growth), invalidates the esrog in either of two circumstances:

There are many other types of spots that can pose halachic questions.

An esrog shaped like a ball is invalid. It is a hidur (beautification of the mitzvah) for the esrog to have shekios uvelitos (valleys and ridges) and for the pitam (the protrusion on top) to be aligned with the uketz (stem).

If even a minute amount of the fruit beneath the glaze is missing, the esrog is invalid on the first day of Sukkos. (Identifying the point at which the glaze ends and the skin begins requires expertise.) On the remaining days of Sukkos, depending on numerous factors, the esrog may still be kosher. (This year, because the first day falls on Shabbos and the Four Species are not taken until the second day, the esrog can be missing small amounts below the chotam. If it is unclear whether anything is missing from the esrog, there is halachic basis to be lenient even on the first day.

The pitam is the shaft that protrudes from the top of the esrog. An esrog that had a pitam—even only during the final stage of its growth—but it has fallen off, cannot be used on the first two days of Yom Tov. If the esrog had a pitam early in its development but it fell off while the esrog was still on the tree, its validity is the subject of debate among contemporary poskim. However, it is generally accepted that if the pitam fell off at a very early stage, the esrog remains kosher. Some are careful to use only an esrog with a pitam to avoid these issues.

(There may be visual clues to when the pitam came off: If the fruit shows signs of healing at the point of connection to the missing pitam, this indicates that it was still on the tree when the pitam was lost.)

According to the Aruch Hashulchan, an esrog whose pitam has fallen off may be used on Chol Hamo’ed.

When an esrog is dark green and doesn’t turn yellow with time, it is a sign that the esrog isn’t completely ripe and is unfit for the mitzvah. Once the esrog is partially yellow or light green, it can be assumed that it will turn completely yellow with time, and it is kosher. Still, it should preferably be completely yellow. Some poskim even write that the lechatchila to use a yellow esrog outweighs all other hidurim.

The stem that connects the esrog to the tree is called the uketz. On the first day of Sukkos the esrog is invalid if so little uketz is attached that it isn’t either protruding from or flush with the esrog but sunken.

According to the Chazon Ish, an esrog must be large enough to displace 3.53 fluid ounces of water. According to R’ Avraham Chaim No’eh, 2.04 fl. oz. is sufficient. Esrogim can sometimes shrink, so one should not purchase one too close to the minimum size.

One should only purchase an esrog from a trusted source, to ensure that it isn’t from a grafted tree, which would likely invalidate it.

An esrog that has dried out to the point that if it would emit no juice if cut is invalid. An esrog from the previous year is presumed dried out unless it was artificially preserved.