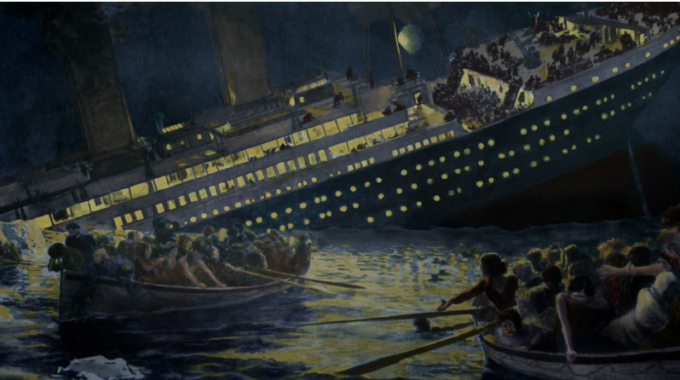 “Where you go, I go,” Ida Straus told her husband, Isidor, aboard the RMS Titanic in April 1912. With lifeboats available for women and children first, men had to wait. Given a chance for a seat due to his wealth and status, Isidor refused a place on a boat. Though she could have gotten on a lifeboat and lived, Ida chose to share the fate of her husband. Both drowned.

Ida’s fateful choice is included in “Titanic: The Exhibition,” now open near Union Square in Manhattan. The exhibit features a large picture of the two first-class passengers as well as a monument of Isidor, a co-owner of Macy’s who served for just over one year in Congress, as a Democrat representing New York’s 15th district.[1]

“Women and children first” was a chivalric ideal without basis in maritime law, and “despite its prominence in the popular imagination, the doctrine was unevenly applied.”[2] To the best of this author’s knowledge, such a doctrine has no basis at all in Torah law or ethics; on the contrary, the Mishnah in Horayos says that saving the life of a man takes precedence over saving that of a woman.[3]

As we have previously noted, various commentaries explain that precedence as based on the man’s being obligated in all the mitzvos while the woman is exempt from time-triggered positive ones.[4] We have also noted that some contemporary authorities assume that this rule, along with the other similar ones in Horayos, are not followed today, though the reason for this is unclear.[5]

Isidor’s apparent noble refusal to accept a place on a lifeboat to which he did not consider himself entitled would seem to be correct according to the Torah[6] (at least if his assumption of not being entitled to a place was correct), but Ida’s insistence on sharing her husband’s fate, despite being couched in Biblical language,[7] is problematic.

As we recently discussed in this forum in the context of hunger strikes, the Torah does not grant an individual absolute autonomy regarding his own life. One is obligated to preserve it whether he wants to or not,[8] so throwing it away out of a desire to remain and die together with one’s spouse would seem to be generally prohibited. (Of course, it is difficult to judge people for decisions made in extremis.)

Ida Straus’s decision to remain on board Titanic is complicated by the fact that the ship did not have enough lifeboats for everyone on board,[9] so her relinquishing a spot may have enabled someone else to survive in her stead.[10] There is considerable halachic debate over the morality of giving up one’s life to save another: As we have previously discussed, many authorities maintain that it is wrong to even just risk one’s life to save that of another, others consider it permitted, and still others rule that it is obligatory.[11] The morality of giving up one’s life outright so that someone else may live is also the subject of dispute.[12] It is clear that there is no obligation to do so, due to the fundamental principle that “your life takes precedence over the life of your friend (chayecha kodmim),”[13] but R’ Chaim ibn Atar (the Or Hachaim) suggests that doing so is indeed a mitzvah, or at least permitted,[14] whereas R’ Yaakov Emden considers it obvious that this is forbidden:

It also seems obvious that one is not permitted to give himself up to be killed in order to save his friend, out of simple desire and out of love that does not depend on anything,[15] unless he knows with certainty that his friend is a greater talmid chacham, kasher, and tzadik than himself…[16] And therefore he may not in such a manner save even his only son whom he loves—unless the father is elderly, such that he can no longer fulfill the commandment of procreation (pru urvu), in which case it seems proper to be lenient when the son is at least a person who is kasher. This is so even if he is not as great as his father and cannot fill his place, or a young child who has not yet become estranged by his actions (hisnaker bema’alalav).[17]

R’ Moshe Feinstein goes even further than R’ Yaakov Emden: He prohibits giving up one’s life to save another even if an ignoramus (am ha’aretz) is proposing to do so in favor of someone who is a talmid chacham and a man of deeds (ba’al ma’asim).[18]

Accordingly, whether Ida Straus was doing a mitzvah or an aveirah by relinquishing her lifeboat seat (assuming that by doing so she was enabling someone else to survive) would seem to be a matter of dispute among halachic authorities.[19]

[9]Wikipedia contributors. Lifeboats of the Titanic. In Wikipedia, The Free Encyclopedia. https://en.wikipedia.org/w/index.php?title=Lifeboats_of_the_Titanic&oldid=1120030230.

[10]Whether this was actually so is unclear. According to Wikipedia: “[Titanic Captain Edward] Smith had ordered his officers to put the “women and children in and lower away.” However, [First Officer William McMaster] Murdoch and [Second Officer Charles] Lightoller interpreted the evacuation order differently: Murdoch as women “and children first, while Lightoller as women and children only. Lightoller lowered lifeboats with empty seats if there were not any women and children waiting to board, while Murdoch only allowed a limited number of men to board if all the nearby women and children had already embarked. This had a significant effect on the survival rates of the men aboard Titanic, whose chances of survival came to depend on which side of the ship they tried to find lifeboat seats.”

Another authority that forbids giving up one’s life to save another is Shu”t Chavalim Ba’ne’imim cheilek 3 siman 108.

[19]Although her motivation may not have been the altruistic goal of saving someone else’s life at the expense of her own, the correctness of an action according to halacha does not generally hinge upon intention, with certain exceptions. A more detailed analysis of this point is beyond the scope of this article.