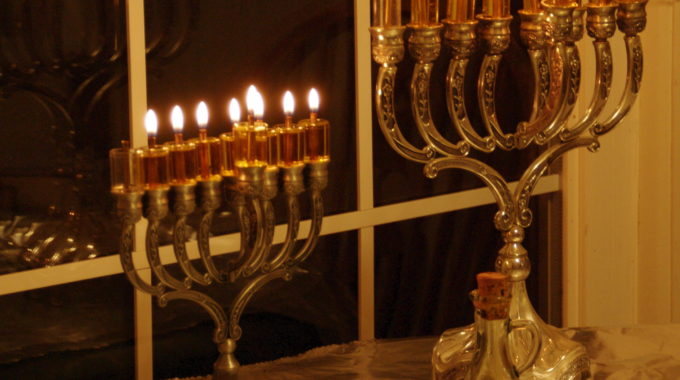 The Shulchan Aruch (O.C. 677:1) writes that if a person eats in one house and sleeps in another, he should light Chanukah candles where he sleeps. According to the Rama, he should light in the house in which he eats.

The Mishnah Brurah writes that if one visits a friend for dinner one night but is not sleeping there, he still lights at home, because the Rama is referring to where one has a fixed location for eating and sleeping. In contrast, the Biur Halacha (citing the Pri Chadash) writes that if one goes away for all eight days of Chanukah, he lights where he is staying, even if he occasionally returns home to eat.

Contemporary poskim disagree concerning where to light if one goes away for one day (either a weekday or Shabbos). Rav Elyashiv and lhbcl”c R’ Shmuel Kamenetsky hold that he must light where he is staying for the majority of Chanukah (and send a proxy to light there if he is elsewhere). The Chovas Hadar writes that he may light where he is staying that night, which is the commonly accepted custom. (Rav Elyashiv and lhbcl”c Rav Kamenetsky may agree as well if he is not in the city in which he lives).

Poskim also disagree concerning where to light on motza’ei Shabbos if one was away for Shabbos (and is returning home afterward). According to R’ Shmuel Kamenetsky, he may light before he leaves, since this is an extension of Shabbos. According to R’ Shlomo Zalman Auerbach, he may light there if he stays for at least half an hour after Shabbos, while the Chovas Hadar says he must stay a few hours. R’ Yaakov Forchheimer suggests leaving a large sign on one’s door reminding himself to light, and lighting when he returns home (which also would permit eating beforehand).

Going Public Excerpted and adapted from a shiur by Dayan Yehoshua Grunwald January 28, 2021…

The Jew in Queue: Line Jumping in Halacha

Adapted from the writings of Dayan Yitzhak Grossman January 28, 2021 In the first article…