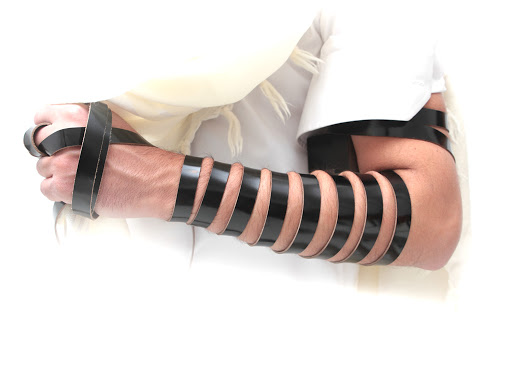 The Magen Avraham offers a second explanation: A person is protected from the mazikin (evil spirits) on his left side by the tefillin worn on the left arm, but the right side lacks protection, so the shofar blown from the right side confers it. The Magen Avraham accepts this as the primary reason for the custom and therefore concludes that a lefty (who wears tefillin on his right) should blow the shofar from the left side of his mouth. This is accepted by the Matei Efraim and R’ Shlomo Zalman Auerbach (Halichos Shlomo, Rosh Hashanah) as well, though the Sha’ar HaTziyun (18) appears to disagree.

The Matei Efraim also notes that the ba’al tokeia should hold the shofar in his right hand, just as other mitzvah objects like a kiddush cup or lulav are held in the right hand to show their importance. If so, why is the argument from tefillin necessary? R’ Shlomo Zalman explains that that halacha applies only to body parts of which there are two, like hands. But since there is only one mouth, we do not say that the right side of the mouth is more significant than the left.