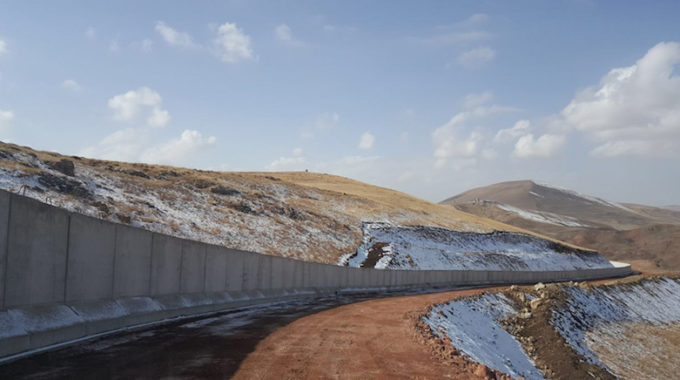 According to Rashi here, the reason for delineating the borders of Eretz Yisrael is because the mitzvos hateluyos ba’aretz (mitzvos dependent on the Land, like trumos and ma’asros) only apply there. The problem is that the Gemara says that location alone does not trigger obligation in these mitzvos; the land must also be given kedushah. The Rambam (Hilchos Bais Habechirah 6) explains that for those who entered Eretz Yisrael with Yehoshua (known as olei Mitzrayim), this kedushah was caused by the conquering of the land, while for the olei Bavel who returned from exile to build the Bayis Sheini, it was attained by chazakah (acting as the owner of the land). Moreover, one cannot argue that according to Rashi, the kedushah is limited to areas within the Torah’s borders, because land conquered beyond those borders also becomes obligated in mitzvos hateluyos ba’aretz (see Gittin 7a).

The Rambam appears to disagree. He writes (Trumos 1:7) that the borders of Eretz Yisrael in Yehoshua’s time only included those locations mentioned in the Mishnah (Gittin 2a), a smaller area than what the Torah delineates here. R’ Shlomo Zalman Auerbach (Ma’adanei Eretz, hilchos trumos) explains that kedushah was not automatically given to all of Eretz Yisrael, only to the part that was conquered.