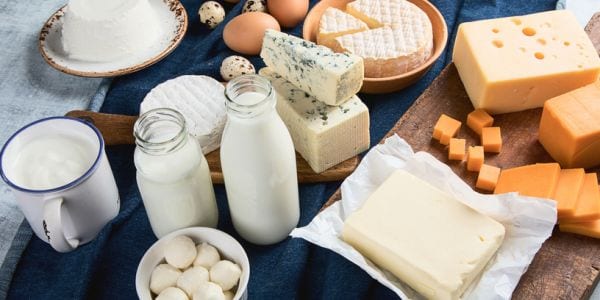 The Rama (O.C. 494:3) writes that it is customary in many places to eat dairy foods as well as meat foods on the first day of Shavuos. He explains that eating meat after dairy in the same meal requires that the bread on the table be replaced with a new loaf, which symbolizes the shtei halechem, the korban of two loaves brought on Shavuos in the Bais Hamikdash.

The Mishnah Berurah (15) adds that it is customary to bake the challah for the dairy meal with butter. This is puzzling, because according to the Shulchan Aruch (Y.D. 97:1), it is forbidden to bake dairy bread. The answer is that the Shulchan Aruch (ibid.) permits baking dairy bread where it is either a small quantity or of an unusual appearance. The Mishnah Berurah must mean that one should bake small challos or make them look different from standard challos.

When eating dairy and meat at the same meal, the Mishnah Berurah (16) writes that one need not recite birkas hamazon in between. Rather, he should clean his mouth out by eating and drinking something pareve to avoid potential basar b’chalav. Some are stricter and divide their meat and dairy foods into separate se’udos, based on the Zohar. They also wait an hour between the meals, as the Zohar says one must wait “sha’ah achas” between dairy and meat.

The exception to this rule is hard cheese (as noted by the Mishnah Berurah himself), after which most wait six hours (see Rama Y.D. 89:2). However, some poskim feel that halachic hard cheese does not exist today (R’ Aharon Kotler, R’ Shmuel Kamenetsky). Others hold that parmesan cheese and the like do qualify as hard cheese (R’ Moshe Heinemann).