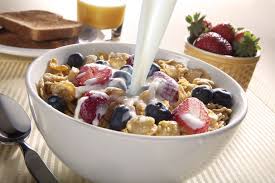 The Gemara (Berachos 35a) connects this pasuk to bracha rishonah, in which one praises Hashem for the food he is about to eat.

When eating a mixture of foods, the Shulchan Aruch (O.C. 212) rules that one generally recites a brachaon the ikar (primary food) and not on the tafel (secondary food), whether the two foods are distinct entities or all mixed as one. On bread with salty fish one recites shehakol, because the bread is eaten as a tafel to the fish. When eating a fruit salad (see Biur Halacha at length), the accepted psak is that if the average spoonful includes both fruits and vegetables, we recite one bracha on the majority. Otherwise, one recites two brachos.

If a mezonos ingredient is part of the mixture, one generally recites only mezonos. Thus a breakfast cereal that contains both a mezonos grain and corn would be mezonos. But if the grain is used for texture and not flavor, it would not.(According to Rav Belsky, this is the case with licorice, whose first ingredient is often flour.) Many foods are questionable, such as schnitzel, Frappuccino with cookie crumbs, cookies-and-cream ice cream, salad with croutons, and yogurt with granola,  and each of these cases must be addressed separately. For example, most poskim hold that one recites shehakol on schnitzel since the primary food is the chicken, though some rule it’s mezonos. If the breading is especially thick, perhaps there is more reason to recite mezonos.