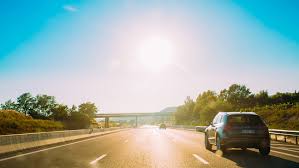 Adapted from a shiur by Rabbi Ari Stauber

When the lonely road gets crowded.

Chazal instituted a prayer, Tefilas Haderech, to be recited by travelers for protection from the dangerous conditions inherent in travel.

To say it, one must first be a traveler. A traveler is one who has departed his city. A person traveling within his city never says Tefilas Haderech.

Even if he is leaving the city and thus qualifies as a traveler, only one who is exposed to the dangers of the road says Tefilas Haderech. The twin dangers to which Chazal addressed the tefila are bandits and wild animals. Because both types of creatures fear large groupings of people, they tend to avoid population centers. Chazal, explains the Rosh, identified the distance from cities at which listim and chayos ra’os become an issue as one parsa, which R’ Moshe Feinstein converts to 2.7 miles.

Because the parsa is only a measure of danger, a place that is huchzak b’sakana has no distance requirement. For example, soldiers on patrol outside city gates in wartime are vulnerable travelers the moment they step outside the gates, and they must say Tefilas Haderech. Traveling in a heavy snowstorm qualifies as well.

The Biur Halacha considers the question of one who is traveling the requisite parsa from his city, but the road to his destination is dotted with other settlements. Because the entire stretch of road is within a parsa of one town or another, none of it is suitable for listim or chaya ra’a infestation, so there is no danger that would mandate the tefila. But perhaps we ought to apply lo plug, the general principle that Chazal don’t differentiate in the application of their enactments among situations, even where the underlying reason doesn’t pertain.

The picture the Biur Halacha paints is representative of most metropolitan areas today. In the New York suburbs, one would be hard-pressed to find a spot that isn’t within a 2.7-mile radius of any settled area, so a jaunt from Monsey or Brooklyn to Lakewood, for example, would be subject to the Biur Halacha’s dilemma. So why do people say Tefilas Haderech on these trips? Given that safek brachos l’hakel, shouldn’t we refrain?

R’ Yaakov Kamenetsky answered that brachos of tefila are unlike other brachos.

In tefila, it is preferable that one pray by himself rather than listen to the chazzan and employ shomaya k’oneh. If he has the ability, he doesn’t even have a choice: Chazaras Hashatz was established for people unable to daven on their own, because everyone should develop a personal relationship with his Creator. Not so with other brachos, which anyone can hear from another.

Therefore, in the case of a tefila we don’t say safek brachos l’hakel. One who is unsure if he said ya’aleh v’yavo in his Yom Tov davening, davens again. As Rabbi Yochanan says (Brachos 21a), “Would that man would pray all day long.”

Like with shemoneh esrai, if one knows how to say Tefilas Haderech, he shouldn’t be yotzai with someone else’s recitation. And there is no problem saying it misafek.

According to the Chazon Ish, this is not an issue: The shiur parsa doesn’t apply at all to automobile travel, because it is huchzak b’sakana due to the risk of collision. As long as one is driving outside the city, he must say Tefilas Haderech. He is challenged by the Brisker Rav and R’ Shlomo Zalman Auerbach, who argue that only dangers that existed in Chazal’s time can create a makom she’huchzak b’sakana and set aside the parsa requirement.