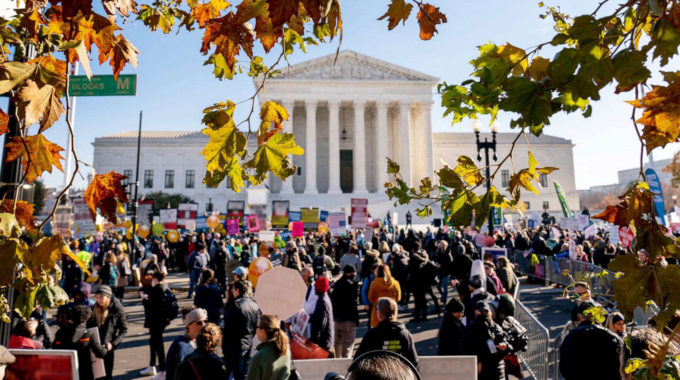 Roe v. Wade and its discontents

The recently leaked draft of Justice Samuel Alito’s proposed majority opinion in Dobbs v. Jackson Women’s Health Organization, potentially one of the most important and consequential Supreme Court rulings in a generation, declares:

We hold that Roe and Casey must be overruled. The Constitution makes no reference to abortion, and no such right is implicitly protected by any constitutional provision…

Roe was egregiously wrong from the start. Its reasoning was exceptionally weak, and the decision has had damaging consequences. And far from bringing about a national settlement of the abortion issue, Roe and Casey have enflamed debate and deepened division. It is time to heed the Constitution and return the issue of abortion to the people’s elected representatives.

Major national Orthodox Jewish organizations have often been ambivalent about efforts by the anti-abortion movement to ban abortion. On the one hand, there is a unanimous consensus that the Torah generally forbids abortion, and that “abortion on demand” is prohibited, but on the other hand, if the more extreme elements of the anti-abortion movement get their way, abortion might become legally prohibited even in circumstances where it is permitted and even mandated by the Torah. As the Orthodox Union stated in reaction to the leak:

The Orthodox Union is unable to either mourn or celebrate the news reports of the U.S. Supreme Court’s likely overturning of Roe v. Wade. We cannot support absolute bans on abortion—at any time point in a pregnancy—that would not allow access to abortion in lifesaving situations. Similarly, we cannot support legislation that permits “abortion on demand”—at any time point in a pregnancy—and does not confine abortion to situations in which medical (including mental health) professionals affirm that carrying the pregnancy to term poses real risk to the life of the mother…[1]

Agudath Israel of America has previously adopted a similar stance:

Jewish tradition teaches that a human fetus has status and dignity; and that termination of pregnancy raises profound moral concerns. Agudath Israel accordingly has urged the Supreme Court to reconsider its holding in Roe v. Wade and supports legislation that restricts abortion on demand. At the same time, in line with its support for religious freedom, Agudath Israel opposes initiatives that would make abortion unlawful even in situations where termination of pregnancy is mandated by religious law as it is, for example, under Sinaitic Jewish law when the pregnancy endangers the life of the mother.[2]

Unfortunately, however, some Orthodox organizations and individuals, in their entirely understandable zeal to repudiate the liberal doctrine of a woman’s absolute right to choose, have occasionally exaggerated or oversimplified the Torah’s opposition to abortion. In actuality, there are a number of major halachic authorities (including R’ Yaakov Emden, R’ Shneur Zalman Fradkin (the Toras Chessed of Lublin), and R’ Eliezer Yehudah Waldenberg (the Tzitz Eliezer[3]) who do allow abortion in certain limited circumstances where the mother’s life is not at stake. (See R’ Yehuda Dovid Bleich’s 1968 Tradition article, “Abortion in Halakhic Literature.”[4]). Although these may constitute a minority faction, their position is taken seriously by many important recent authorities, as we shall iy”H discuss in a follow-up to this article.

The Torah discussion of abortion comprises two closely intertwined groups of questions, one theoretical and conceptual, the other practical and concrete:

These two groups of questions are, of course, tightly coupled: If abortion is murder, and more generally, if it is prohibited mide’Oreisa, then it is much more difficult to justify on any grounds other than the need to preserve the mother’s life. If it is not murder, and certainly if it is only Rabbinically prohibited, then it is much easier to argue that other exigent circumstances can also justify abortion.

Is abortion murder? Is it prohibited min haTorah?

As we have indicated, the fundamental question in the Torah-based discussion of abortion is whether it constitutes murder or not, and whether the prohibition is Biblical or Rabbinic. Numerous authorities insist that it does constitute murder and is Biblically prohibited, for both Jews and non-Jews.[5] One of the most important and prominent exponents of this view is R’ Moshe Feinstein, who is quite emphatic about it.[6]

While there is also a significant opinion that (for a Jew) it is not murder and only Rabbinically prohibited,[7] the most prominent defender of which is the Tzitz Eliezer,[8] the consensus seems to reject the view that it is only Rabbinic.[9] As R’ Aharon Lichtenstein declares (in an essay originally delivered orally at the Knesset as an expert opinion[10]):

In my opinion, we should not grant this opinion (that the prohibition of abortion is entirely Rabbinic) the status of a serious position to which we can give much consideration, and this is not only because it is startling from an ethical perspective, but because it apparently contradicts an explicit halacha…[11]

(Even if it is assumed that the prohibition is Biblical, it still does not necessarily follow that it constitutes murder, as there are other suggestions for the basis for the prohibition. A detailed discussion of this issue is beyond the scope of this article.[12])

[1]Statement by the Union of Orthodox Jewish Congregations of America on US Supreme Court’s Potential Overturning of Roe v Wade. May 3, 2022.

[3]R’ Elli Fischer enumerates a list of  “Modern halakhists who permit abortion in cases where mother’s life isn’t threatened” here, although some of the entries are not entirely accurate:

He includes Shu”t Maharit cheilek 1 siman 97, but while Maharit does indeed rule (in siman 99 ibid.) that it is permitted to perform an abortion “for the need of the mother,” many Acharonim argue that the implication of siman 97 is otherwise, and there is accordingly considerable debate over whether Maharit in siman 97 was retracting his leniency of siman 99, and additionally over whether the dispensation of “the need of the mother” in siman 99 indeed extends (as a simple reading of Maharit’s language admittedly indicates) even to the case where the mother’s life is not in danger, or is limited to where it is (see the sources and discussion in Shu”t Yabia Omer cheilek 4 E.H. siman 1 osios 7-8).

Rav Fischer includes Shu”t Rav Pe’alim E.H. 1:4, but while the Rav Pe’alim does cite the lenient view and accordingly concludes that there is basis for leniency, he repeatedly qualifies that he is “unwilling to respond in the form of hora’ah, neither to prohibit nor to permit,” and that he is not revealing his opinion.

Rav Fischer includes Yabia Omer ibid., but that responsum is primarily about a case where physicians maintained that the mother’s life was indeed in danger. The Yabia Omer does state in passing that in light of the sources and arguments he sets forth, “there is considerable basis (makom rav) to permit [abortion] at least in case of illness, even when there is no danger to the mother,” but this is not quite the same thing as actually permitting it in such a case.

[7]Shu”t Emunas Shmuel siman 14 s.v. Uvazeh meyushav; Shu”t Chaim Veshalom (cheilek 1) end of E.H. siman 40 s.v. Ki chein ha’oleh. Toras Chessed (cheilek 2 E.H. siman 42 os 31) argues that this is the position of a number of Rishonim. Shu”t Maharash Engel cheilek 7 siman 170 os 2 states that “there are many opinions” that abortion (for a Jew) is only Rabbinically prohibited, and in cheilek 5 siman 89 he invokes this opinion to recommend that where an abortion is necessary to preserve the life of the mother, it should be performed by a Jew rather than a non-Jew, since for a Jew “there are many leniencies.” Cf. Sdei Chemed, Ma’areches Ha’alef–Klalim, Pe’as Hasadeh os 52; Rav Bleich ibid. pp. 76-77.