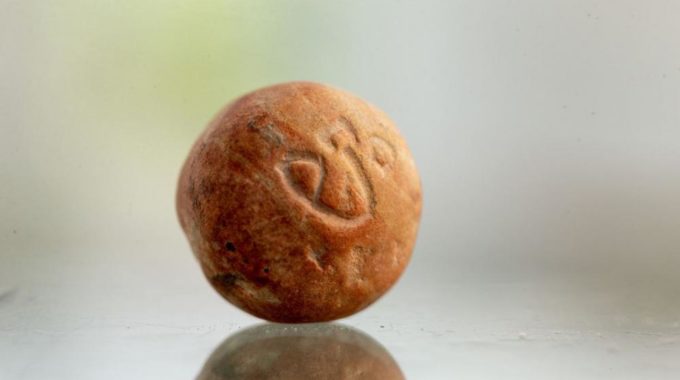 Torah amid the ruins

The archeology world was recently excited by the discovery of a marked beka (machatzis hashekel) weight in a dig at the Kosel.

A small stone bearing an inscription that archeologists identified as the word “beka”—written backwards—was unearthed in Kosel excavations at Robinson’s Arch five years ago. Nobody got excited at the time, because nobody noticed. A volunteer in the Ir David wet sifting project in Emek Tzurim National Park, sorting recently through that Kosel dirt, found the artifact.

The weight of a shekel has contemporary Halachic implications. To determine how much silver the father of a bechor must give a kohen for pidyon haben, can we simply multiply the weight of the found “beka” stone by ten to reach the required (Bemidbar 18:16) five shekalim? Can this find, and others like it, resolve Halachic debates about shiurei hamitzvos?

This question is addressed by the Gemara (Bava Basra 73b) in the aggados of Rabba Bar Bar Chana, who told of being led through the desert by an Arab merchant to see the maisai midbar. In order to resolve the disputes between Bais Hillel and Bais Shamai (Menachos 41b) regarding the configuration of tzitzis, Rabba excised the corner of the talis from one of the bodies to bring it to the Chachamim for examination. Subsequently, Rabba’s animals were unable to walk, which the Arab explained was due to a tradition that one who takes anything from the maisai midbar gets stuck. Rabba returned the tzitzis and the animals walked. When he told the story to the Chachamim, they rebuked him, saying that it had been unnecessary to take a sample when a verbal report would have sufficed.

While the mefarshim debate whether Rabba Bar Bar Chana meant that these stories actually occurred (see, for example, Ritva ad loc.), it would seem to be instructive nonetheless with regard to the fundamental question of whether Halachic conclusions can be derived from ancient finds.

R’ Chaim Kanievsky (Ta’ama Dikra, Parashas Shelach, p. 130 in the 4th ed.), however, sees in the fact that Rabba Bar Bar Chana was prevented min hashamayim from taking the tzitzis, and in the fact that it apparently didn’t occur to him to take the obvious step of counting the strings, that it is not the will of Hashem that we determine Halacha by means outside of Torah like rummaging through antiquities.

In discussing the machlokes between Rashi and Rabbainu Tam about the sequence of the parashios in tefillin, the Smag (Mitzvas Asei 22) adduces evidence for Rashi from tefillin that were found buried near the kever of Yechezkel Hanavi—a clear support for the Halachic admissibility of archeological evidence. The Drisha (O.C. 34) rejects the proof on technical grounds: Perhaps the tefillin were buried because the Halacha follows Rabbainu Tam so they were pasul. The Bach rejects this argument because the tefillin could easily have been fixed rather than interred.

The Ramban writes that he changed his mind about the weight of a shekel—to side with Rashi over the Rif—after being shown an ancient shekel coin in Akko with an inscription that local Samaritans could read.

In discussing this issue, many poskim have pointed to problems with the evidenciary value of many finds: the paucity of the archeological record and the lack of proof that whatever was exhumed is a valid representative of its kind.

The Chazon Ish (Hilchos Shevi’is 3:18) rejects the presumption that a town known today by a particular name shares the location of its historical counterpart, so the Gemara’s statement (Chulin 6b) that Bais Sh’an is not subject to shemita cannot be applied to the Bais Sh’an of today.

A similar uncertainty surrounds the city of Lod, which the Gemara (Megilla 4a) says was walled in Yehoshua’s time and therefore celebrates Purim on the 15th of Adar. What about the Lod of today? Though others disagreed, Dayan Weiss (Minchas Yitzchak 8:61) felt that excavations in the 1980s that appeared to confirm that the new Lod is the old Lod helped to create a safek, and that residents should hear the Megilla again on the 15th without a bracha.

It is important to distinguish between the actual evidence from a dig and the pronouncements of archeologists, some of whom are given to presenting assumptions and guesses as fact. Dead men tell no tales, so an imaginative archeologist is free to exploit the absence of evidence to improvise a story about his find. (Note that Dayan Weiss in Lod pointed not to the claims of the archeologists but to the knowledge of experts from the Asra Kadisha organization, who examined graves that were uncovered.)

While demonstrating this trend is beyond the scope of this article, consider the license taken in our own beka case by archeologist Eli Shukron, who directed the excavations on behalf of the Israel Antiquities Authority. To the question of why something intended to serve as a weight would be inscribed backwards, Shukron had an answer at the ready: This inscription was obviously made by an artisan who also inscribed seals—which are engraved in mirror script—so he mixed up the two.

“Apparently, the seal craftsman got confused when he engraved the inscription on the weight and mistakenly used mirror script as he was used to doing,” said Shukron in a press release. It gets worse: “From this mistake we can learn about the general rule: The artists who engraved weights during the First Temple period were the same artists who specialized in creating seals.”